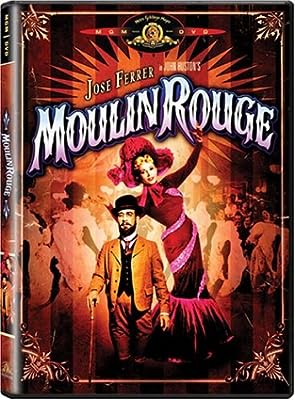 Price: $9.98
As of 2022-08-14 02:51:37 UTC (more info)
Product prices and availability are accurate as of 2022-08-14 02:51:37 UTC and are subject to change. Any price and availability information displayed on http://www.amazon.com/ at the time of purchase will apply to the purchase of this product.
Availability: Not Available - stock arriving soon
Buy Now from Amazon
Product Information (more info)
CERTAIN CONTENT THAT APPEARS ON THIS SITE COMES FROM AMAZON SERVICES LLC. THIS CONTENT IS PROVIDED 'AS IS' AND IS SUBJECT TO CHANGE OR REMOVAL AT ANY TIME.

Nominated* for seven Academy Awards(r) (including Best Picture) and winner of two, this visually stunning biography of master artist Henri de Toulouse-Lautrec is a "painting come to life" (Time)! "Flawlessly directed" (The Hollywood Reporter) by John Huston (The African Queen), from a script by Anthony Veiller and Huston, Moulin Rouge is simply "irresistible" (Newsweek)! As a dwarf, Toulouse-Lautrec (Jose Ferrer) believes he's too ugly to ever fall in love. So he loses himself in painting and cognac. A fixture at Paris' infamous turn-of-the-century Moulin Rouge nightclub, Lautrec meets a girl from the street who then breaks his heart. Luckily, newfound artistic success, copious amounts of drink and friendship with a new woman keep him alive. Will he be able to mend his broken heart in time to recognize the true love now staring him inthe face?

It was one of the top 10 grossing films of 1952 and garnered seven Oscar nominations, but Moulin Rouge is neglected today. Not to be confused with the Baz Luhrmann-Nicole Kidman extravaganza, this is a color-soaked tale of Toulouse-Lautrec (Jose Ferrer), based on a romanticized novel about the artist's life. Director John Huston explores the discrepancy between the creation of exquisite art and the messy business of living--especially messy for the growth-stunted, alcoholic painter, whose affairs revolve around prostitutes. The soap-opera aspects of the storyline limit the picture (as does the distracting fact of Ferrer walking on his knees), but it has some gorgeous things in it. The experiments in color photography (which horrified the Technicolor people) are spectacularly successful, and the movie won Oscars for set decoration and costumes. George Auric's haunting melody became a standard, so lovely even the dubbed performance of Zsa Zsa Gabor couldn't hurt it. --Robert Horton