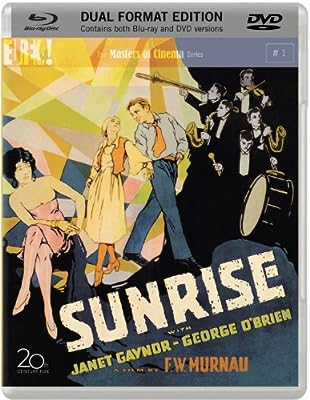 Price: $28.64
As of 2023-02-05 11:05:57 UTC (more info)
Product prices and availability are accurate as of 2023-02-05 11:05:57 UTC and are subject to change. Any price and availability information displayed on http://www.amazon.com/ at the time of purchase will apply to the purchase of this product.
Availability: Not Available - stock arriving soon
Buy Now from Amazon
Product Information (more info)
CERTAIN CONTENT THAT APPEARS ON THIS SITE COMES FROM AMAZON SERVICES LLC. THIS CONTENT IS PROVIDED 'AS IS' AND IS SUBJECT TO CHANGE OR REMOVAL AT ANY TIME.

SUNRISE: (1927) This new 3-disc edition of SUNRISE contains two versions of the film, the previously released Movietone version and and alternate silent version, recently discovered in the Czech Republic, of a higher visual quality than any previous source. The culmination of one of the greatest careers in film history, F. W. Murnau's SUNRISE blends a story of fable-like simplicity with unparalled visual imagination and technical ingenuity. Murnau's tale of of the idyllic marriage of a peasant couple (George O'Brien and Janet Gaynor) threatened by a vamp-like seductress from the city (Margaret Livingston) created a milestone of film expressionism. Made in the twilight of the silent era, SUNRISE became both a swan song for a vanishing medium and one of the few films to instantly achieve legendary status. Winner of three Oscars for Best Actress (Gaynor), Cinematography and a never-repeated award for Best Unique and Artistic Picture, its influence and stature has grown with every passing year. SPECIAL DUAL FORMAT EDITION: Film-restored HD transfers of two different versions: Movietone and Czech Original English intertitles on the Movietone and optional English subtitles on the Czech Murnau's 4 Devils: Traces of a Lost film Janet Bersrom's updated documentary 20-page booklet with details of the film restorations and comparisons of versions Full-length audio commentary by cinematographer John Bailey on the Movietone version Rare outtakes with John Bailey commentary Original Movietone score (mono) + alternate Olympic Chamber Orchestra score (stereo) ** Playable on Most North American & Canadian Blu-ray Players