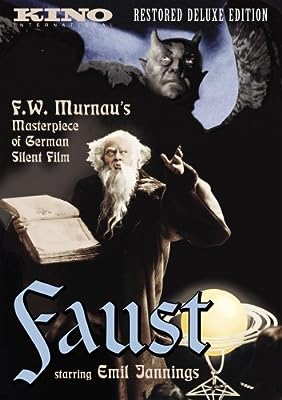 Price: $19.10
As of 2023-02-05 15:10:57 UTC (more info)
Product prices and availability are accurate as of 2023-02-05 15:10:57 UTC and are subject to change. Any price and availability information displayed on http://www.amazon.com/ at the time of purchase will apply to the purchase of this product.
Availability: Not Available - stock arriving soon
Buy Now from Amazon
Product Information (more info)
CERTAIN CONTENT THAT APPEARS ON THIS SITE COMES FROM AMAZON SERVICES LLC. THIS CONTENT IS PROVIDED 'AS IS' AND IS SUBJECT TO CHANGE OR REMOVAL AT ANY TIME.

F. W. Murnau was one of the boldest and imaginative artists working during the silent period of German Expressionism and his creation of Faust is considered one of the greatest of all supernatural fantasies. The visionary Murnau was so distinctive with his use of canvas that he constructed one of the most haunting vistas of heaven and hell. The extraordinary use of special effects can be witnessed with the iconic shot of Mephisto as he largely hovers above the helpless village with his gigantic wings obscuring the light and shadow of the night sky. Murnau offered such a feeling of depth and perceptive throughout his artistry, especially with the breathtaking shots of Faust taking a flight through the skies on Mephisto's cape, as we watch the two of them soar past villages and farms and mountains and rivers while the earth from below seems to be collapsing beneath them.

Mobilizing the full resources of the Ufa Studios, F.W. Murnau (Nosferatu, Sunrise) orchestrated a colossal adaptation of Goethe s FAUST that ranks alongside Fritz Lang s Metropolis as the greatest achievement of the German silent cinema. Gösta Ekman stars as the titular alchemist who, struggling with his faith amidst a devastating plague, is offered the power to cure and the gift of youth... in exchange for his soul. As the diabolical Mephisto, Emil Jannings (The Last Laugh) delivers a performance of operatic scale and intensity, by turns charming, comical, and horrific. This special Kino edition contains the Friedrich Wilhelm Murnau Foundation s meticulous restoration of the original German version of the film (with unique hand-painted intertitles), as well as a lengthier alternate cut prepared by the Ufa Studios in 1930.

For the visual look for Faust it is obvious that Murnau used models for most of the landscapes, as his art director Robert Herlth stated, "there were pines and larches made of reeds and rushes, glass-wool clouds, cascades, fields of real turf carefully stuck on plaster. When Murnau saw us at work, he bent his great height to help us make our little rocks and trees." Murnau was a bold and creative artist who loved to paint with light and shadow and it is said that on many occasions he would complain to his cameraman Carl Hoffmann that he could see too much in the shot, that much of the picture should be obscured except for the main focus of the scene. Like Fritz Lang, Murnau was a master at artificial effects and unlike the films of today, there was no need in attempting to make the world he was creating look real to the audience. The buildings that are soaring beneath the wings of Mephisto, clearly are models with its exaggerated jagged perspectives of its architecture and yet these artificial effects seem to feel much more effective than realistic ones, because the fantasy world of Faust is never intended to define a physical universe, but a imaginary landscape of dreams and nightmares.