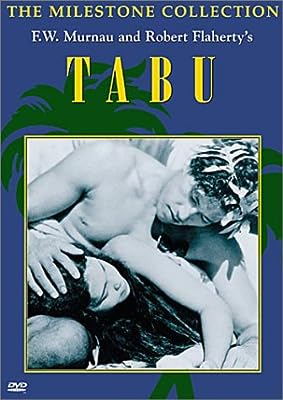 Price:
As of 2023-02-01 06:31:35 UTC (more info)
Product prices and availability are accurate as of 2023-02-01 06:31:35 UTC and are subject to change. Any price and availability information displayed on http://www.amazon.com/ at the time of purchase will apply to the purchase of this product.
Availability: Not Available - stock arriving soon
Buy Now from Amazon
Product Information (more info)
CERTAIN CONTENT THAT APPEARS ON THIS SITE COMES FROM AMAZON SERVICES LLC. THIS CONTENT IS PROVIDED 'AS IS' AND IS SUBJECT TO CHANGE OR REMOVAL AT ANY TIME.

Filmed entirely in Tahiti, "Tabu" represents an unusual collaboration between legendary directors F.W. Murnau (Nosferatu, Sunrise) and Robert Flaherty (Nanook of the North). Two lovers are doomed by a tribal edict decreeing that the girl is "tabu" to all men. While the lovers' flight from judgment and the ultimate power of the tabu are reminiscent of Murnau's expressionist films, "Tabu" is all open air and sunlight, sparkling on the ocean and glistening on the beautiful young bodies of the native men and women. Now available completely uncensored and restored by UCLA, this cinematic landmark is one of the most gorgeous black and white films ever made, and was the 1931 Academy Award winner for Best Cinematography.

Conceived by two master filmmakers, but essentially made by only one, Tabu is the last great silent film (released four years into the talkie era). Few classics have had a more fraught history, starting with the dicey notion of combining the radically different approaches of documentarist Robert Flaherty and supernaturalist F.W. Murnau. After selecting the South Seas locations, collaborating on the story, and doing some preliminary photography, Flaherty withdrew, leaving Murnau to realize this tale of forbidden love and implacable retribution in an earthly paradise. The results, ravishing to behold, complete a spiritual trilogy begun with Nosferatu (1921-22) and Sunrise (1927), Murnau's other films of young couples drawn asunder by phantoms. Floyd Crosby won an Academy Award® for his cinematography. The director himself was killed in a car wreck just before his film was released. All the more tragic that Murnau's original, uncut version was never seen till Milestone Film & Video's restoration in 1990. --Richard T. Jameson