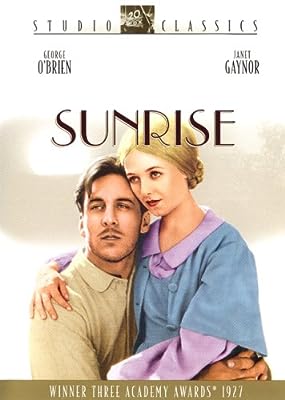 A farmer (George O'Brien) intends to drown his wife (Janet Gaynor), so he can be with a seductive city woman (Margaret Livingston). But although he considers carrying out the hideous crime, the farmer is unable to go through with it. Then, as husband and wife encounter a life threatening rainstorm, their love and loyalty are put to the ultimate test. This tender story of betrayal and redemption is debated as one of the finest silent movies of all time. Winner of three Academy Awards. 1927, Black and White, Approximate Running Time 95 minutes. Bonus Features include audio commentary by John Bailey, outtakes with optional commentary, original scenario by Carl Mayer with annotations by Murnau, Murnau's lost film Four Devils, original Four Devils screenplay, original Sunrise screenplay, theatrical trailer, Aspect Ratio 1.20:1, original movietone score (mono), alternate Olympic Chamber Orchestra score (Stereo).

There are those who rate Sunrise the greatest of all silent films. Then again, some consider it the finest film from any era. Such claims invite a backlash, but do yourself a favor and give it a look. At the very least, you'll know you've seen a movie of extraordinary visual beauty and emotional purity. This universal tale of a farm couple's journey from country to city and back again was the first American film for F.W. Murnau, the German director of Nosferatu and The Last Laugh whose everyday scenes seemed haunted by phantoms and whose most extravagant visions never lost touch with reality. Hollywood afforded him the technical resources to unleash his imagination, and in turn he opened up the power of camera movement and composition for a generation of American filmmakers. You'll never forget the walk in the swamp, the ripples on the lake, the trolley ride from forest to metropolis. This movie defines the cinema. --Richard T. Jameson