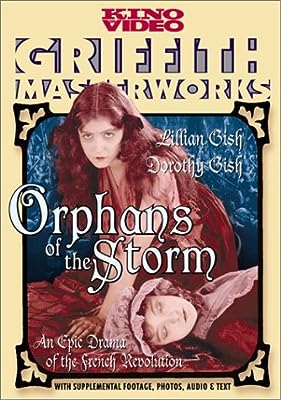 Price: $21.64
As of 2021-06-15 18:07:39 UTC (more info)
Product prices and availability are accurate as of 2021-06-15 18:07:39 UTC and are subject to change. Any price and availability information displayed on http://www.amazon.com/ at the time of purchase will apply to the purchase of this product.
Availability: Not Available - stock arriving soon
Buy Now from Amazon
Product Information (more info)
CERTAIN CONTENT THAT APPEARS ON THIS SITE COMES FROM AMAZON SERVICES LLC. THIS CONTENT IS PROVIDED 'AS IS' AND IS SUBJECT TO CHANGE OR REMOVAL AT ANY TIME.

Re-creating the aristocratic splendor and devastating poverty of 18th century France, David Wark Griffith weaves an emotionally charged tale of two delicate souls caught in the tempest of revolution. Lillian and Dorothy Gish star as the resourceful Henriette and the blind Louise, who leave their countryside home for Paris in hopes of having Louise's sight restored. Spied by the lecherous Marquis de Praille (Morgan Wallace), Henriette is abducted and the women are tragically separated in a city on the brink of anarchy. With the help of a kind-hearted nobleman (Joseph Schildkraut), Henriette endeavors to find the helpless Louise, but cruel fate repeatedly thwarts her efforts. Griffith exploits their heart-wrenching dilemma with masterful skill, crowning the drama with political intrigue, spectacle, and his usual degree of social moralizing (staunchly disclaiming any parallels between the French Revolution and recent waves of "bolshevism"), drawing the multi-layered epic to its white-knuckle climax outside the old city gates in Paris, beneath the gleam of the guillotine's scarlet blade. Orphans of the Storm provided Lillian Gish with her final role for Griffith, bringing to a close the long and fruitful collaboration that began in 1912 with An Unseen Enemy (Lillian's and Dorothy's Film Debut).