The Birth of a Nation - Special Edition [Blu-ray] 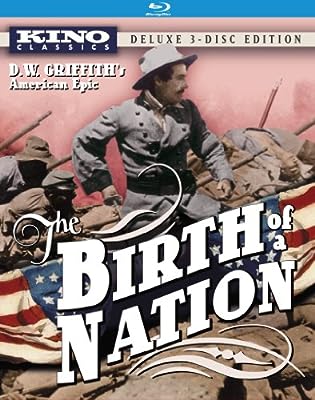 Price: $25.29
As of 2021-06-16 12:43:29 UTC (more info)
Product prices and availability are accurate as of 2021-06-16 12:43:29 UTC and are subject to change. Any price and availability information displayed on http://www.amazon.com/ at the time of purchase will apply to the purchase of this product.
Availability: Not Available - stock arriving soon
Buy Now from Amazon
Product Information (more info)
CERTAIN CONTENT THAT APPEARS ON THIS SITE COMES FROM AMAZON SERVICES LLC. THIS CONTENT IS PROVIDED 'AS IS' AND IS SUBJECT TO CHANGE OR REMOVAL AT ANY TIME.

Product Description
[DISC 1 - Blu-ray]: Nearly 100 years after its initial release, THE BIRTH OF A NATION remains one of the most controversial films ever made and a landmark achievement in film history that continues to fascinate and enrage audiences. It is the epic story of two families, one northern and one southern, during and after the Civil War. D. W. Griffith's masterful direction combines brilliant battle scenes and tender romance with a vicious portrayal of African-Americans. It was the greatest feature-length blockbuster yet to be produced in the United States and the first to be shown in the White House. After seeing it, President Woodrow Wilson remarked it was ''like writing history with lightning!'' However flawed, the film made history. In cities and states across the country, it energized the National Association for the Advancement of Colored People (NAACP), which tried to have the film banned and censored. The film also inspired African Americans to move into filmmaking as a way to offer alternative images and stories. This is a newly mastered (in 2011) version of the film in 1080p High Definitionfrom archival 35mm elements. It includes new music by the Mont Alto Motion Picture Orchestra (2011), in 2.0 Stereo and DTS-HD Master Audio 5.1 PLUS, spoken introductions by D.W. Griffith and Walter Huston (including the newly rediscovered intermission sequence). FIRST TIME EVER ON BLU-RAY!

[DISC 2 - SD DVD]: Is a DVD copy of Kino's ''Griffith Masterworks'' edition of the film restored by David Shepard of Film Preservation Associates in 1993. It contains an orchestral score adapted in 1993 from the original score by Joseph Carl Breil in 2.0 Stereo and ''The Making of The Birth of a Nation'' (24 min.) Produced by David Shepard and compiled and written by Russell Merritt.

[DISC 3 - SD DVD]: SPECIAL FEATURES (also on DVD ported over from Kino's ''Griffith Masterworks'' edition) that includes a filmed prologue to The Birth of a Nation (1930. 6 mins. Featuring D. W. Griffith and Walter Huston), Civil War Shorts directed by D. W. Griffith: In the Border States (1910. 16 mins.) The House with the Closed Shutters (1910. 17 mins.) The Fugitive (1910. 17 mins.) His Trust (1910. 14 mins. -- courtesy David Shepard. Music by Robert Israel, performed by the Biograph Quartet) His Trust Fulfilled (1910. 11 mins.) Swords and Hearts (1911. 16 mins.) The Battle (1911. 17 mins.), New York vs. The Birth of a Nation -- an archive of information documenting the battles over the film's 1922 re-release, including protests by the NAACP, transcripts of meetings, legal documents, newspaper articles, and a montage of scenes ordered cut by the New York Censor Board. Excerpts from a The Birth of a Nation souvenir book (1915) and several original programs.