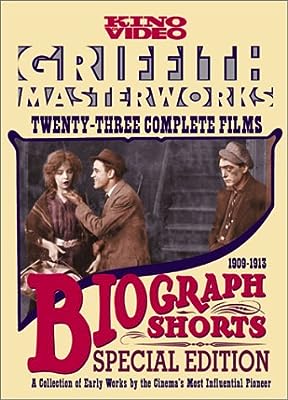 Price: $17.52
As of 2021-06-15 23:55:53 UTC (more info)
Product prices and availability are accurate as of 2021-06-15 23:55:53 UTC and are subject to change. Any price and availability information displayed on http://www.amazon.com/ at the time of purchase will apply to the purchase of this product.
Availability: Not Available - stock arriving soon
Buy Now from Amazon
Product Information (more info)
CERTAIN CONTENT THAT APPEARS ON THIS SITE COMES FROM AMAZON SERVICES LLC. THIS CONTENT IS PROVIDED 'AS IS' AND IS SUBJECT TO CHANGE OR REMOVAL AT ANY TIME.

The selection of motion pictures featured in this two-disc set traces D.W.Griffith's rapid unparalled development as a filmmaker during his five year stint at the Biograph Company-a development that contributed substantially to the emergence of film as a powerful form of cultural expression. From the crude humor melodramatic devices of The Adventures of Dollie (1908) through the remarkably dynamic The Battle At Elderbush Gulch (1913), one is able to witness Griffith's rapid gains in self-confidence and increasing command over the still new medium of motion pictures. Griffith was noted for many achievements, but among the most striking was the use of parallel editing, both for purpose of suspense (An Unseen Enemy, The Lesser Evil) and to generate a powerful social commentary (Corner the Wheat, The Usurer). But as The Unchanging Sea demonstrates, he was also able to harness the technique for more elegiac purposes. In these fifteen films-plus eight bonus shorts-one finds Griffith experimenting with (and thus contributing to the development of) various genres, including the Western (The Last Drop of Water), the crime picture (The Musketeers of Pig Valley) and the seafaring drama (Enoch Arden, one of Griffith's earliest two-reel endeavors).

The most fertile period of D.W. Griffith's early career is generously preserved in this special edition of Biograph Shorts. A satisfied actor in early silent films, Griffith was hesitant when the American Biograph company offered him a director's job in 1908, but his first film, "The Adventures of Dollie" (reconstructed here from a Library of Congress paper print), gave Griffith the filmmaking fever, and from 1908 to 1913 he averaged two or three shorts per week, of which these 23 represent a comprehensive sampling. Obscurities mingle with masterpieces on two DVDs; highlights include 1909's "A Corner in Wheat" (which established Griffith's mastery of social realism); "The Musketeers of Pig Alley," a pioneering gangster film shot on authentic New York locations; and "The Battle at Elderbush Gulch," a dynamic early Western.

Although many of these films appear on another compilation (D.W. Griffith: Years of Discovery), important exceptions include 1911's "Enoch Arden" (a prestigious adaptation of Tennyson's poem); "The Usurer," one of Griffith's best films from 1910; "The Last Drop of Water," a grand-scale Western made during Griffith's first trip to California (and an indication of grander films to come); and "His Trust," the first of a two-part serial featuring Griffith's then-common use of blackfaced actors as "noble Negroes." Most important (in addition to early appearances by Lillian Gish, Lionel Barrymore, and other silent stars) is the arc of progress that these films represent. In Griffith's capable hands, we witness "flickers" in their most rapid stage of development, incorporating new techniques (parallel action and cross-cutting, changing camera angles within a scene, dramatic close-ups) from a tireless innovator who would soon rise to the challenge of epic, feature-length productions. --Jeff Shannon