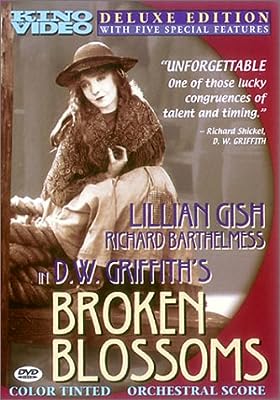 Price: $16.49
Availability: Not Available - stock arriving soon
Buy Now from Amazon
Product Information (more info)
CERTAIN CONTENT THAT APPEARS ON THIS SITE COMES FROM AMAZON SERVICES LLC. THIS CONTENT IS PROVIDED 'AS IS' AND IS SUBJECT TO CHANGE OR REMOVAL AT ANY TIME.

Richard Barthelmess gives a sensitive portrayal of a Chinese man who travels to England to spread the pacifist teachings of the Orient, but it is Lillian Gish who illuminates the screen. In this, the most heart-rending performance of her career, she plays a fifteen-year-old street urchin who longs to escape her miserable existence. Emotionally scarred by the torment and neglect of her abusive father (Donald Crisp), she collapses in the shop of the lonely and disillusioned "yellow man." As he tenderly nurtures her back to health, an unspoken romance flowers between them, awakening in each of them feelings of love they thought themselves forever denied.