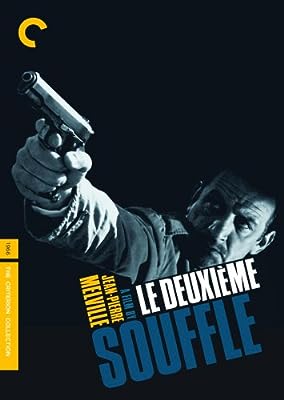 Price: $29.99
As of 2022-11-27 15:51:44 UTC (more info)
Product prices and availability are accurate as of 2022-11-27 15:51:44 UTC and are subject to change. Any price and availability information displayed on http://www.amazon.com/ at the time of purchase will apply to the purchase of this product.
Availability: Not Available - stock arriving soon
Buy Now from Amazon
Product Information (more info)
CERTAIN CONTENT THAT APPEARS ON THIS SITE COMES FROM AMAZON SERVICES LLC. THIS CONTENT IS PROVIDED 'AS IS' AND IS SUBJECT TO CHANGE OR REMOVAL AT ANY TIME.

With his customary restraint and ruthless attention to detail, director Jean-Pierre Melville follows the parallel tracks of French underworld criminal Gu (the inimitable Lino Ventura), escaped from prison and roped into one last robbery, and the suave inspector, Blot (Paul Meurisse), relentlessly seeking him. The implosive Le deuxième soufflé captures the pathos, loneliness, and excitement of a life in the shadows with methodical suspense and harrowing authenticity, and contains one of the most thrilling heist sequences Melville ever shot.

It's hard to imagine that crime novelist/screenwriter José Giovanni didn't write with melancholy tough guy Lino Ventura in mind. First came 1960's Classe Tous Risques, then 1966's Le Deuxième Soufflé, and then 1969's Sicilian Clan. In Jean-Pierre Melville's Giovanni adaptation--the title translates as "Second Wind"--Ventura plays deadly, yet deeply moral lifer Gustav "Gu" Minda. When the 46-year-old busts out of the pen, three people wait for him in Paris: nightclub proprietor Sophie Manouche (Christine Fabréga), double-crossing rival Jo Ricci (Marcel Bozzuffi), and manipulative Inspector Blot (Diabolique's Paul Meurisse). After Minda and Manouche’s unflappable bodyguard, Alban (Le Trou’s Michel Constantin), dispatch the thugs trying to blackmail Manouche, the former partakes in an armored-car heist in order to flee the country with the cool blonde (like the bank robbery in Michael Mann's Heat, this entire sequence plays out in broad daylight). Needless to say, not everyone gets out alive. Compared to sleek Melville classics like Bob le Flambeur and Le Samouraï, this 144-minute movie has its longeurs, but Melville and Ventura go together like Scorsese and De Niro. Consider this understated drama a dry run for their Resistance-era masterpiece, Army of Shadows (in which Meurisse also appears). Supplemental features include detail-oriented commentary from author Ginette Vincendeau (Jean-Pierre Melville: An American in Paris) and programmer Geoff Andrew (the British Film Institute), remembrances from publicist-turned-director Bertrand Tavernier, an essay by critic Adrian Danks, and TV interviews with Ventura and Melville, who describes the actor as "a force of nature" and "a monolith." --Kathleen C. Fennessy