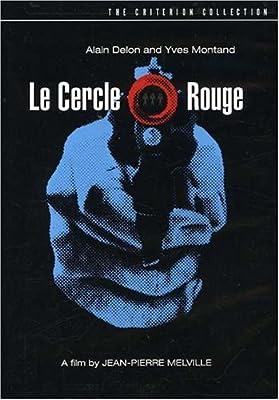 Price: $39.95
As of 2023-02-01 16:08:07 UTC (more info)
Product prices and availability are accurate as of 2023-02-01 16:08:07 UTC and are subject to change. Any price and availability information displayed on http://www.amazon.com/ at the time of purchase will apply to the purchase of this product.
Availability: Not Available - stock arriving soon
Buy Now from Amazon
Product Information (more info)
CERTAIN CONTENT THAT APPEARS ON THIS SITE COMES FROM AMAZON SERVICES LLC. THIS CONTENT IS PROVIDED 'AS IS' AND IS SUBJECT TO CHANGE OR REMOVAL AT ANY TIME.

Master thief Corey (Alain Delon) is fresh out of prison. But instead of toeing the line of law-abiding freedom, he finds his steps leading back to the shadowy world of crime, crossing paths with a notorious escapee (Gian Maria Volonté) and an alcoholic ex-cop (Yves Montand). As the unlikely trio plots a heist against impossible odds, their trail is pursued by a relentless inspector (André Bourvil), and fate begins to seal their destinies. Taking its title from Buddhist lore, Jean-Pierre Melville’s Le Cercle rouge combines honorable anti-heroes, coolly atmospheric cinematography, and breathtaking set pieces to create a masterpiece of crime cinema.

Crime cinema has never been so meticulously and coolly executed. Taciturn thief Alain Delon (intense and dapper in trenchcoat and fedora) and escaped prisoner Gian Maria Volonte cross paths as if by fate, bound by saving each other's life, and join with disgraced ex-cop Yves Montand for their next job: a daring jewel robbery. Le Cercle Rouge is the ultimate expression of the romantic doom that Jean-Pierre Melville established in his masterpieces Bob Le Flambeur and Le Samourai. The centerpiece heist, a wordless 20-minute sequence with masked men communicating in codified gestures, is a tour de force of cinematic efficiency that tops even Rififi in its celebration of criminal skill and nerve. Melville's cool detachment doesn't allow us to really warm up to these uncompromising pros, but his cinematic precision is spellbinding and his unforgiving world of loyalty, professionalism, sacrifice, and codes of honor is an irresistible underworld fantasy.

The Criterion DVD restores the film, which was originally cut by 40 minutes for its American release, to its full-length director's cut. Additionally, it features new interviews with Melville's assistant director Bernard Stora and friend and expert Rui Nogueira, rare archival interviews with the director and his cast, and a new introduction by filmmaker and Melville fan John Woo among its wealth of supplements. --Sean Axmaker