Army of Shadows (The Criterion Collection) 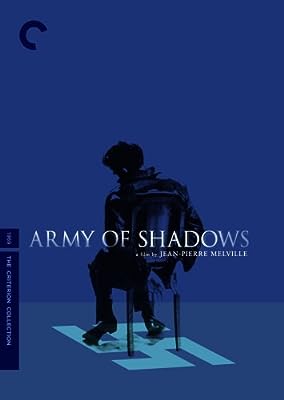 Price: $39.95
As of 2022-11-29 13:00:51 UTC (more info)
Product prices and availability are accurate as of 2022-11-29 13:00:51 UTC and are subject to change. Any price and availability information displayed on http://www.amazon.com/ at the time of purchase will apply to the purchase of this product.
Availability: Not Available - stock arriving soon
Buy Now from Amazon
Product Information (more info)
CERTAIN CONTENT THAT APPEARS ON THIS SITE COMES FROM AMAZON SERVICES LLC. THIS CONTENT IS PROVIDED 'AS IS' AND IS SUBJECT TO CHANGE OR REMOVAL AT ANY TIME.

JEAN-PIERRE MELVILLE’S MASTERPIECE ABOUT THE FRENCH RESISTANCE WENT UNRELEASED IN THE UNITED STATES FOR THIRTY-SEVEN YEARS, BEFORE ITS TRIUMPHANT THEATRICAL DEBUT IN 2006. ATMOSPHERIC AND GRIPPING, ARMY OF SHADOWS IS MELVILLE’S MOST PERSONAL FILM, FEATURING LINO VENTURA, PAUL MEURISSE, JEAN-PIERRE CASSEL, AND THE INCOMPARABLE SIMONE SIGNORET AS INTREPID UNDERGROUND FIGHTERS WHO MUST GRAPPLE WITH THEIR OWN BRAND OF HONOR IN THEIR FIGHT AGAINST EVIL.

Who would've guessed that the best film of 2006 would be a 37-year-old thriller about the French Resistance during World War II? Hailed as a masterpiece by an overwhelming majority of reputable critics, Jean-Pierre Melville's Army of Shadows wasn't officially released in America until 2006 (hence its appearance on many of that year's top-ten lists), but its reputation as a French classic was already well-established throughout Europe. Fully restored in 2004 and released in the U.S. by Rialto Pictures, it represents the gold standard of films about the French Resistance, based upon Joseph Kessel's 1943 novel and imbued with personal touches by Melville, an Alsatian Jew whose own involvement in the Resistance qualifies Army of Shadows as a semi-autobiographical exercise in somber nostalgia, as indicated by an opening quote echoing Melville's ironic belief that memories of Nazi occupation needn't always be traumatic.

Having lived through this history, Melville doesn't treat it lightly; in Army of Shadows, the threat of death hangs over every scene like a shroud. Unfolding with flawless precision, the plot begins in 1942 and focuses on a small, secretive band of Resistance fighters led by Gerbier (Lino Ventura), whose intuitive sense of danger lends additional suspense to the film's dark, atmospheric study of grace under pressure. While working in the classical tradition of the Hollywood films he admired, Melville breaks from convention with lengthy, deliberately paced scenes in which tension builds to a subtle yet almost unbearable intensity. With the possible exception of a brief and wryly humorous scene involving Resistance leader (and future Prime Minister) Gen. Charles de Gaulle, every scene in Army of Shadows supports Melville's predominant themes of solitude and futility. Melville's visually and thematically bleak outlook may prove challenging for some, but Army of Shadows is remarkably beautiful in its own way, and it gains power with each additional viewing through flawless development of memorable characters played by a first-rate cast. Especially memorable is Simone Signoret as Gerbier's boldly pragmatic ally Mathilde, a woman in a war of men, with a tragic vulnerability that ultimately decides her fate. As intellectually stimulating as it is thrilling to experience, Army of Shadows represents the triumphant zenith of Melville's posthumous recognition as a world-class auteur. Thanks to the Criterion Collection, this masterpiece can now be widely appreciated, along with Criterion's previous DVD releases of Melville's earlier classics Bob Le Flambeur, Le Samourai, and Le Cercle Rouge. --Jeff Shannon