Hands Over the City (The Criterion Collection) 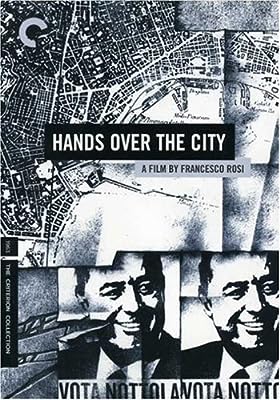 Price: $39.95
As of 2021-10-20 04:17:54 UTC (more info)
Product prices and availability are accurate as of 2021-10-20 04:17:54 UTC and are subject to change. Any price and availability information displayed on http://www.amazon.com/ at the time of purchase will apply to the purchase of this product.
Availability: Not Available - stock arriving soon
Buy Now from Amazon
Product Information (more info)
CERTAIN CONTENT THAT APPEARS ON THIS SITE COMES FROM AMAZON SERVICES LLC. THIS CONTENT IS PROVIDED 'AS IS' AND IS SUBJECT TO CHANGE OR REMOVAL AT ANY TIME.

Anchored by a ferocious lead performance from Rod Steiger as a scheming land developer, Francesco Rosi’s Hands Over the City moves breathlessly from a cataclysmic building collapse to the backroom negotiations of civic leaders vying for power in the City Council election. Plunging headfirst into the politically driven real-estate speculation that has devastated Naples’ civilian landscape, Hands Over the City, which was awarded the Golden Lion at the 1963 Venice Film Festival, remains a blistering work of social realism.