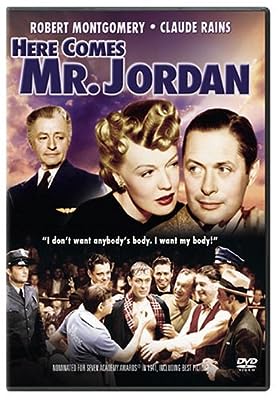 Price: $14.45
As of 2021-08-01 05:23:20 UTC (more info)
Product prices and availability are accurate as of 2021-08-01 05:23:20 UTC and are subject to change. Any price and availability information displayed on http://www.amazon.com/ at the time of purchase will apply to the purchase of this product.
Availability: Not Available - stock arriving soon
Buy Now from Amazon
Product Information (more info)
CERTAIN CONTENT THAT APPEARS ON THIS SITE COMES FROM AMAZON SERVICES LLC. THIS CONTENT IS PROVIDED 'AS IS' AND IS SUBJECT TO CHANGE OR REMOVAL AT ANY TIME.

When a boxer (Robert Montgomery) is accidentally called to Heaven 50 years before his time, it's upto celestial executive extraordinaire Mr. Jordan (Claude Rains) to straighten out the matter. When Columbia Pictures' financial advisors read the screenplay for the fantasy comedy HERE COMES MR. JORDAN, they had their doubts as to its box-office potential. Screenwriter Sidney Buchman went directly to studio president Harry Cohn in an effort to convince him to make the film. Cohn liked the script's uniqueness and, saying that all his bankers wanted was "what sold last year," told Buchman he'd make the picture. To play the saxophone-playing boxer Joe Pendelton, Cohn decided to borrow Robert Montgomery from MGM. Although Mongomery had some initial doubts about his part, he delivered what was to become an Oscar -nominated performance. The film, which received a total of seven 1941 nominations, including Best Picture, won two (Best Motion Picture Story, Best Screenplay). HERE COMES MR. JORDAN

Even after two remakes--one a classic (Heaven Can Wait), the other, not so much (Chris Rock's Down to Earth)--this 1941 fantasy, an Oscar-winner for Best Original Story and Screenplay, has lost none of its ethereal charms. Robert Montgomery gives a knockout performance as Joe Pendleton, a boxer "in the pink" and poised to be the next heavyweight champion until a celestial messenger (Edward Everett Horton at his fussy best) pulls him from an impending plane crash and sends him to heaven before his time. Courtesy of Mr. Jordan (Claude Rains), Joe resumes his training in the body of a wealthy, unscrupulous businessman whose wife and personal secretary are plotting to murder. James Gleason steals his scenes as Joe's understandably befuddled manager, with lovely Evelyn Keyes as Bette Logan, whose innocent father the real Farnsworth framed and sent to prison, and with whom Joe/Farnsworth falls in love. Though this DVD doesn't even feature a chapter menu, the film itself is, as advertised, "as fantastic a yarn as was ever spun" and will make you feel, as Bette does when she looks into Joe's eyes, "warm, alive, and happy." And they don't make too many like that anymore. --Donald Liebenson