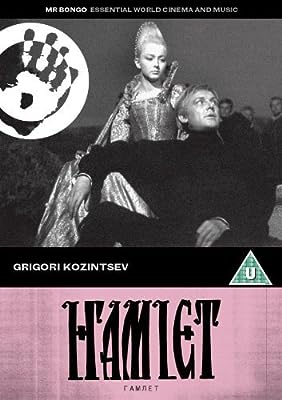 Price: $11.33
As of 2021-07-31 11:09:47 UTC (more info)
Product prices and availability are accurate as of 2021-07-31 11:09:47 UTC and are subject to change. Any price and availability information displayed on http://www.amazon.com/ at the time of purchase will apply to the purchase of this product.
Availability: Not Available - stock arriving soon
Buy Now from Amazon
Product Information (more info)
CERTAIN CONTENT THAT APPEARS ON THIS SITE COMES FROM AMAZON SERVICES LLC. THIS CONTENT IS PROVIDED 'AS IS' AND IS SUBJECT TO CHANGE OR REMOVAL AT ANY TIME.

The surface of ceremonies and rituals celebrating the coronation of King Claudius (Mikhail Nazvanov) and his marriage to Hamlet's mother (Elza Radzina) leaves the young prince indifferent. Hamlet's melancholic nature finds no relief from his brooding, not even in his courtship of Ophelia (Anastasiya Vertinskaya). However, a nocturnal visit from his father's ghost changes everything. Claudius treachery having been brought to light, Hamlet conducts a quest to avenge his father's death. Grigori Kozintsev's renowned Soviet production ranks among the finest adaptations of Shakespeare on film. His strong visual style places the characters on a rich widescreen canvas while preserving the inward dimension of Hamlet's character. Laurence Olivier, director and star of Hamlet, the Oscar-winning 1948 English production, praised Kozintsev's Hamlet, singling out Innokenty Smoktunevsky's performance as the definitive screen performance of the Prince of Denmark.