Fritz Lang's The Indian Tomb (aka Journey to the Lost City, Part 2) 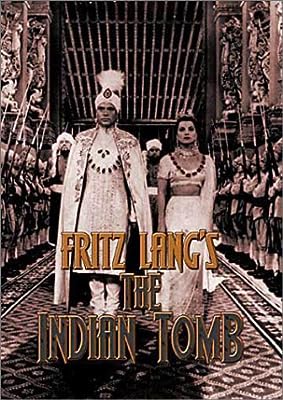 Price: $208.18
As of 2023-02-02 12:44:58 UTC (more info)
Product prices and availability are accurate as of 2023-02-02 12:44:58 UTC and are subject to change. Any price and availability information displayed on http://www.amazon.com/ at the time of purchase will apply to the purchase of this product.
Availability: Not Available - stock arriving soon
Buy Now from Amazon
Product Information (more info)
CERTAIN CONTENT THAT APPEARS ON THIS SITE COMES FROM AMAZON SERVICES LLC. THIS CONTENT IS PROVIDED 'AS IS' AND IS SUBJECT TO CHANGE OR REMOVAL AT ANY TIME.

After more than two decades of exile in Hollywood, master filmmaker Fritz Lang triumphantly returned to his native Germany to direct the lavish two-part adventure tale The Tiger of Eschnapur and The Indian Tomb from a story he had co-authored almost forty years earlier. In the grand tradition of the serialized cliffhanger, this film picks up right where The Tiger of Eschnapur ends. The adventure concludes with a rescue from a sandstorm, a trek through the jungle, a cave of lepers, and a bloody palace rebellion. Together, these films provide the cinematic link between the classic silent serials and the modern action/adventures of Indiana Jones and The Mummy.

In the late 1950s, director Fritz Lang returned to the German cinema, home of his great silent creations Die Nibelungen and Metropolis. His new project was, appropriately, a throwback to the early German days, a two-part cliffhanger originally conceived for the silents. The Indian Tomb is part two, picking up where The Tiger of Eschnapur left off, as a lovesick Maharaja exacts his vengeance. Once you adjust to Lang's measured pacing (and if you accept the variable acting), the movie's bright colors and complicated political machinations take over. Auteurists will recognize Lang's impeccable eye for screen space and his obsessive concern with the price of tempting fate. Even nonauteurists will appreciate the revolt of the underground leper colony and the cobra dance performed by Debra Paget, who wears something less than a bikini. This is melodrama served up without apology by a director more interested in patterns than psychology. --Robert Horton