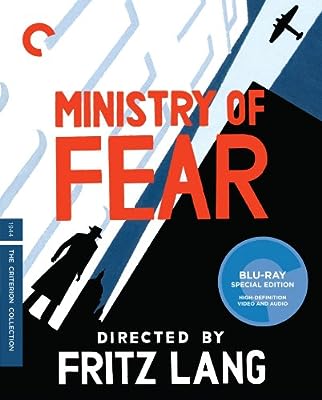 Price: $18.01
As of 2022-12-06 23:45:06 UTC (more info)
Product prices and availability are accurate as of 2022-12-06 23:45:06 UTC and are subject to change. Any price and availability information displayed on http://www.amazon.com/ at the time of purchase will apply to the purchase of this product.
Availability: Not Available - stock arriving soon
Buy Now from Amazon
Product Information (more info)
CERTAIN CONTENT THAT APPEARS ON THIS SITE COMES FROM AMAZON SERVICES LLC. THIS CONTENT IS PROVIDED 'AS IS' AND IS SUBJECT TO CHANGE OR REMOVAL AT ANY TIME.

Though not as well known or praised as some of director Fritz Lang's other film noir efforts like The Big Heat (1953) or The Woman in the Window (1944), his 1944 thriller Ministry of Fear remains a visually striking and frequently taut blend of noir tropes and wartime espionage drama. Based on the novel by Graham Greene, the picture stars Ray Milland as a man, newly released from an asylum, who becomes embroiled in a plot by Nazi agents in England to deliver Allied military plans into the hands of the enemy. He soon finds himself the quarry of both the Axis and British police, with only comely Austrian refugee Marjorie Reynolds (Holiday Inn) to help him. Aided immeasurably by Henry Sharp's cinematography, which steeps the action in an almost supernatural layer of white fog, and Victor Young's suspenseful score, Ministry of Fear works best at depicting the mounting layers of threats, all seemingly unrelated, that weave around Milland, underscoring his questionable mental state and Lang's ability to tap into the psychological elements of noir. Once the disparate threads come together, the film becomes a bit more standard-issue thriller material, due in part to associate producer Seton I. Miller's script, which sands down the emotional complexities of Greene's source material (much to the dismay of the author, who disavowed the final product). But Lang completists and noir aficionados should appreciate this lesser effort from the director, especially with so much to recommend it, from Milland, one year away from his Oscar win for The Lost Weekend, and Dan Duryea's alarming turn as a duplicitous tailor with a pair of lethal shears, to Criterion's crisp 2K digital restoration. The Criterion Blu-ray and DVD are supplemented by a 17-minute interview with Lang scholar Joe McElhaney, who discusses the film's production, its relation to other works by the director, and its comparison to Alfred Hitchcock's thrillers, among other topics. An original theatrical trailer and liner notes by Glenn Kenney round out the extras. --Paul Gaita