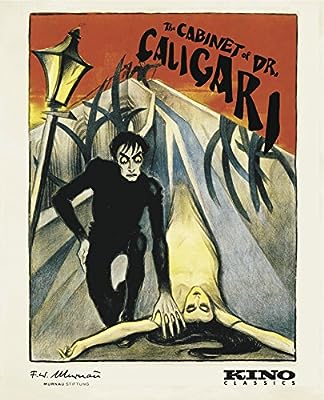 Price: $17.38
As of 2021-10-23 17:18:56 UTC (more info)
Product prices and availability are accurate as of 2021-10-23 17:18:56 UTC and are subject to change. Any price and availability information displayed on http://www.amazon.com/ at the time of purchase will apply to the purchase of this product.
Availability: Not Available - stock arriving soon
Buy Now from Amazon
Product Information (more info)
CERTAIN CONTENT THAT APPEARS ON THIS SITE COMES FROM AMAZON SERVICES LLC. THIS CONTENT IS PROVIDED 'AS IS' AND IS SUBJECT TO CHANGE OR REMOVAL AT ANY TIME.

Robert Wiene's The Cabinet of Dr. Caligari is one of the most visually frightening and bizarre horror films of all time and the quintessential film that started the German Expressionism movement in silent cinema. German Expressionism is a style that was largely confined to Germany due to the isolation the country experienced during World War I and usually involved surreal set designs with wildly non-realistic, geometrically absurd sets. The visual aethestics of The Cabinet of Dr. Caligari presents a world full of sharp hostile landscapes and environments of abstract shapes, bizarre angles, twisted shadows and distorted sets. The building architecture is off kilter and many of the props seem to be painted on floors and walls to represent light and shadows that are geometrically off-balance. No other film has equalled The Cabinet of Caligari's haunting visual style which hypnotically seduces the viewer under its eerie and creepy spell.

In 1920, one brilliant movie jolted the postwar masses and catapulted the movement known as German Expressionism into film history. That movie was The Cabinet of Dr. Caligari, a plunge into the mind of insanity that severs all ties with the rational world. Director Robert Wiene and a visionary team of designers crafted a nightmare realm in which light, shadow and substance are abstracted, a world in which a demented doctor and a carnival sleepwalker perpetrate a series of ghastly murders in a small community. This authoritative edition of The Cabinet of Dr. Caligari is a 4K restoration scanned from the (mostly) preserved camera negative at the German Federal Film Archive.

Score performed by the Studio For Film Music at the University of Music, Freiburg

The Cabinet of Dr. Caligari is not only considered one of the first major horror films of the cinema, but the zombie like characteristics of Cesare clearly influenced the Universal monster films of the 1930's, most famously Boris Korloff as the iconic Frankenstein. The film was also one of the first major films to establish a twist ending, which was something never really seen before in the movies and quite shocking for its time. And yet the most intriguing and disturbing aspect of The Cabinet of Dr. Caligari is its prophetic theories that the film foreseen the upcoming rise of Nazism in the later years of Germany, in which the way German Expressionism was used; portraying a frightening heinous world of unbalance, delusions, murder and madness. Siegfried Kracauer suggested in his book From Caligari to Hitler, that the character of Caligari actually symbolized Hitler, and the German people were the sleep-walkers hypnotized under Caligari's wicked spell.