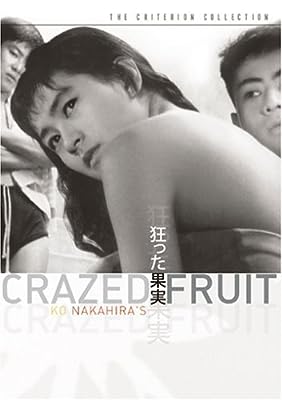 Price: $29.95
As of 2021-07-26 06:19:47 UTC (more info)
Product prices and availability are accurate as of 2021-07-26 06:19:47 UTC and are subject to change. Any price and availability information displayed on http://www.amazon.com/ at the time of purchase will apply to the purchase of this product.
Availability: Not Available - stock arriving soon
Buy Now from Amazon
Product Information (more info)
CERTAIN CONTENT THAT APPEARS ON THIS SITE COMES FROM AMAZON SERVICES LLC. THIS CONTENT IS PROVIDED 'AS IS' AND IS SUBJECT TO CHANGE OR REMOVAL AT ANY TIME.

Two brothers compete for the amorous favors of a young woman during a seaside summer of gambling, boating, and drinking in the seminal "sun tribe" (taiyozoku) film from director Ko Nakahira. Adapted from the controversial novel by Shintaro Ishihara—and critically savaged for its lurid portrayal of post war sexual revolution among Japan's young and privileged—Crazed Fruit is an anarchic outcry against tradition and the older generation.

Crazed Fruit ushered in a new era for Japanese cinema. Shot in 17 days (extravagant by Nikkatsu Studio standards), the film's strong language, intimations of casual sex, and complete disregard for authority, would unsettle an entire nation, while blazing a path for the likes of Seijun Suzuki and Nagisa Oshima. (Even François Truffaut was impressed.) It begins one leisurely summer as brothers Natsuhisa (Yujiro Ishihara) and Haruji (Oshima star Masahiko Tsugawa) sail, water-ski, and make "boredom their credo''--until both fall for the married Eri (Ishihara’s future wife, Mie Kitahara). In short order, boredom will be replaced by tragedy. Inventively lensed by Shigeyoshi Mine (Tokyo Drifter), Ko Nakahira's controversial debut was the centerpiece of a 1956 trio of taiyozoku, or "Sun Tribe," films about affluent youth written by novelist-turned-politician Shintaro Ishihara (Yujiro's brother). The suitably dark and jazzy score is by Kurosawa vets Masaru Sato (Yojimbo) and Toru Takemitsu (Ran). --Kathleen C. Fennessy