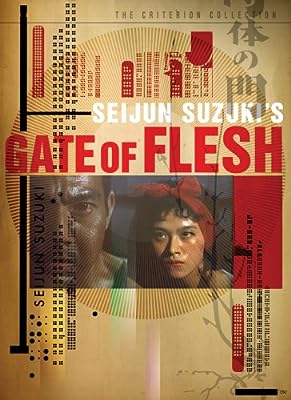 Price: $29.95
As of 2021-04-09 19:51:22 UTC (more info)
Product prices and availability are accurate as of 2021-04-09 19:51:22 UTC and are subject to change. Any price and availability information displayed on http://www.amazon.com/ at the time of purchase will apply to the purchase of this product.
Availability: Not Available - stock arriving soon
Buy Now from Amazon
Product Information (more info)
CERTAIN CONTENT THAT APPEARS ON THIS SITE COMES FROM AMAZON SERVICES LLC. THIS CONTENT IS PROVIDED 'AS IS' AND IS SUBJECT TO CHANGE OR REMOVAL AT ANY TIME.

In the shady black markets and bombed-out hovels of post–World War II Tokyo, a tough band of prostitutes eke out a dog-eat-dog existence, maintaining tenuous friendships and a semblance of order in a world of chaos. But when a renegade ex-soldier stumbles into their midst, lusts and loyalties clash, with tragic results. With Gate of Flesh, visionary director Seijun Suzuki delivers a whirlwind of social critique and pulp drama shot through with brilliant colors and raw emotions.

Gate of Flesh (Nikutai no mon) is another wonderful example of why Seijun Suzuki will go down in history as one of Japan's craftiest and most ingenious B-movie directors. As exhibited in Branded to Kill and Tokyo Drifter Suzuki has the uncanny ability to take shoestring budgets, predictable boilerplate scripts, tight schedules, and studio-contracted actors and spin these elements to create extremely deep and layered films. Gate of Flesh is no exception. In post-World War II Japan, life on the Tokyo streets has become desperate. Amidst the ruins, a tough, well-worn group of prostitutes bands together for survival and companionship. When an ex-soldier enters into the circle, flames of jealousy, anger, and lust are fueled, ending with disastrous results. On the surface, the story is a simple pulp tale of decadence thrown together by Nikkatsu Studios to make a quick buck. But, in the hands of Suzuki-san, Gate of Fleshturns into a hallucinatory, surreal, critical post-modern essay on the decline of loyalty and morality in modern society. --Rob Bracco