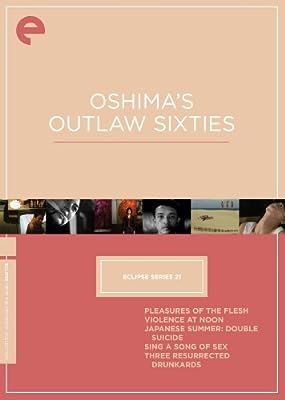 Price: $49.99
As of 2021-03-02 05:03:34 UTC (more info)
Product prices and availability are accurate as of 2021-03-02 05:03:34 UTC and are subject to change. Any price and availability information displayed on http://www.amazon.com/ at the time of purchase will apply to the purchase of this product.
Availability: Not Available - stock arriving soon
Buy Now from Amazon
Product Information (more info)
CERTAIN CONTENT THAT APPEARS ON THIS SITE COMES FROM AMAZON SERVICES LLC. THIS CONTENT IS PROVIDED 'AS IS' AND IS SUBJECT TO CHANGE OR REMOVAL AT ANY TIME.

Often called the Godard of the East, Japanese director Nagisa Oshima was one of the most provocative film artists of the twentieth century, and his works challenged and shocked the cinematic world for decades. Following his rise to prominence at Shochiku, Oshima struck out to form his own production company, Sozo-sha, in the early sixties. That move ushered in the prolific period of his career that gave birth to the five films collected here. Unsurprisingly, this studio renegade was fascinated by stories of outsiders—serial killers, rabid hedonists, and stowaway misfits are just some of the social castoffs you’ll meet in these audacious, cerebral entries in the New Wave surge that made Japan a hub of truly daredevil moviemaking.

Pleasures of the Flesh
Nagisa Oshima, 1965
A corrupt businessman blackmails the lovelorn reprobate Atsushi into watching over his suitcase full of embezzled cash while he serves a jail sentence. Rather than wait for the man to retrieve his money, however, Atsushi decides to spend it all in one libidinous rush.

Violence at Noon
Nagisa Oshima, 1966
Containing more than two thousand cuts and a wealth of inventive widescreen compositions, this coolly fragmented character study is a mesmerizing investigation of criminality and social decay.

Japanese Summer: Double Suicide
Nagisa Oshima, 1967
A sex-obsessed young woman, a suicidal man she meets on the street, a gun-crazy wannabe gangster—these are just three of the irrational, oddball anarchists trapped in an underground hideaway in Oshima’s devilish, absurdist film.

Three Resurrected Drunkards
Nagisa Oshima, 1968
A trio of bumbling young men frolic at the beach. While they swim, their clothes are stolen and replaced with new outfits. Donning these, they are mistaken for undocumented Koreans and end up on the run from comically outraged authorities.