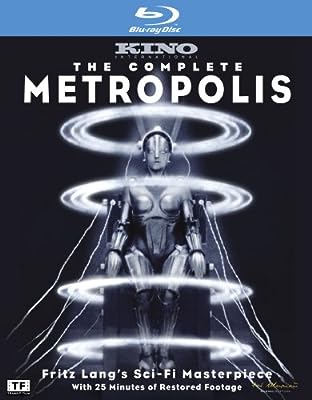 Price: $39.95
As of 2023-02-06 10:30:17 UTC (more info)
Product prices and availability are accurate as of 2023-02-06 10:30:17 UTC and are subject to change. Any price and availability information displayed on http://www.amazon.com/ at the time of purchase will apply to the purchase of this product.
Availability: Not Available - stock arriving soon
Buy Now from Amazon
Product Information (more info)
CERTAIN CONTENT THAT APPEARS ON THIS SITE COMES FROM AMAZON SERVICES LLC. THIS CONTENT IS PROVIDED 'AS IS' AND IS SUBJECT TO CHANGE OR REMOVAL AT ANY TIME.

Fritz Lang's 1927 expressionist science-fiction epic Metropolis was one of the most expensive and influential films of the silent era. Throughout the decades Metropolis as been regarded as the quintessential science-fiction film, and was the first feature length science-fiction film that pioneered the genre. Made in Germany, within the UFA studios during the Weimar Period, Metropolis is set in a futuristic urban dystopia, and follows the attempts of Freder, the wealthy son of the city's ruler, and Maria, to overcome the vast gulf separating the classist nature of their city. Metropolis employed large vast sets and groundbreaking special effects to create two extraordinary worlds: the great city of Metropolis, with its beautiful Art Deco design of the expressways, airplanes, bridges and towering skyscrapers that reached the skies, and the bleak subterranean workers underground city, which included over 25,000 extras.

Incorporating more than 25 minutes of newly discovered footage, this 2010 restoration of METROPOLIS is the definitive edition of Fritz Lang's science fiction masterpiece. Backed by a new recording of Gottfried Huppertz's 1927 score, the film's dazzling visual design and special effects are more striking than ever. And the integration of scenes and subplots long considered lost endows METROPOLIS with even greater tension and emotional resonance, as it dramatizes the conflict between wealthy uber-capitalists and rebellious subterranean laborers - orchestrated by a diabolical scientist capable of destroying them both.

George Lucas's blockbuster Star Wars was hugely influenced by Fritz Lang's epic, most obviously the design of the droid of C-3PO which is a striking parallel to the android of the false Maria. The creation of the android and of its creator Rotwang are greatly reminiscent to the old laboratories of mad scientists that came out of the 30's James Whale Frankenstein horror films, and the subplot of the creation of the false Maria, is highly similar to The Terminator machines or the Replicants in the sci-fi noirBlade Runner. Unfortunately after its German premiere Metropolis was cut substantially; and large portions of the film were lost over the subsequent decades. Fortunately after 70 years, a print of Lang’s original cut of the film which included the last major missing pieces was found in a museum in Argentina, and after a long restoration process, the restored film was shown on large screens in Berlin and Frankfurt simultaneously on 12 February 2010.