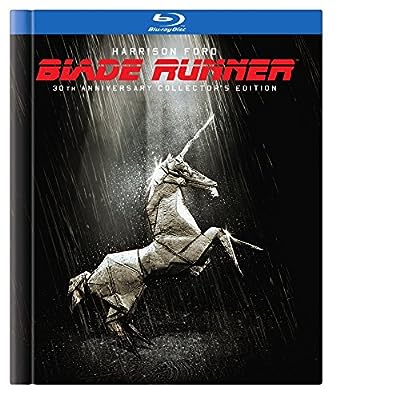 Price: $19.98
As of 2022-10-02 21:28:00 UTC (more info)
Product prices and availability are accurate as of 2022-10-02 21:28:00 UTC and are subject to change. Any price and availability information displayed on http://www.amazon.com/ at the time of purchase will apply to the purchase of this product.
Availability: Not Available - stock arriving soon
Buy Now from Amazon
Product Information (more info)
CERTAIN CONTENT THAT APPEARS ON THIS SITE COMES FROM AMAZON SERVICES LLC. THIS CONTENT IS PROVIDED 'AS IS' AND IS SUBJECT TO CHANGE OR REMOVAL AT ANY TIME.

In a cyberpunk vision of the future, man has developed the technology to create replicants, human clones used to serve in the colonies outside Earth but with fixed lifespans. In Los Angeles, 2019, Deckard is a Blade Runner, a cop who specializes in terminating replicants. Originally in retirement, he is forced to re-enter the force when four replicants escape from an off-world colony to Earth. The #1 sci-fi film of all time is captured in this 3-disc Blu-ray/DVD and 30th Anniversary commemorative gift set. The set includes: the final cut on Blu-ray and DVD.The 30th Anniversary Collector's Edition box set features an all-new concept spinner car, action Lenticular and a 72-page art production book with never-before-seen Ridley sketches, poster art and photos from the set.