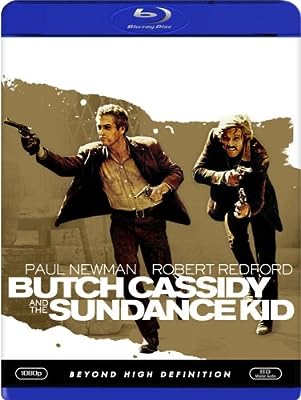 Price: $9.96
As of 2022-08-18 09:10:18 UTC (more info)
Product prices and availability are accurate as of 2022-08-18 09:10:18 UTC and are subject to change. Any price and availability information displayed on http://www.amazon.com/ at the time of purchase will apply to the purchase of this product.
Availability: Not Available - stock arriving soon
Buy Now from Amazon
Product Information (more info)
CERTAIN CONTENT THAT APPEARS ON THIS SITE COMES FROM AMAZON SERVICES LLC. THIS CONTENT IS PROVIDED 'AS IS' AND IS SUBJECT TO CHANGE OR REMOVAL AT ANY TIME.

Paul Newman and Robert Redford set the standard for the "buddy film" with this box office smash set in the Old West. The Sundance Kid (Redford) is the frontier's fastest gun. His sidekick, Butch Cassidy (Newman), is always dreaming up new ways to get rich fast. If only they could blow open a baggage car without also blowing up the money-filled safe inside... Or remember that Sundance can't swim before they escape a posse by leaping off a cliff into rushing rapids... Times are changing in the west and life is getting tougher. So Butch and Sundance pack their guns, don new duds, and, with Sundance's girlfriend (Katharine Ross), head down to Bolivia. Never mind that they don't speak Spanish - they'll manage somehow. A winner of four Academy Awards (including best screenplay and best song), here is a thoroughly enjoyable blend of fact and fancy done with true affection for a bygone era and featuring the two flashiest, friendliest funniest outlaws who ever called out "hands up!"