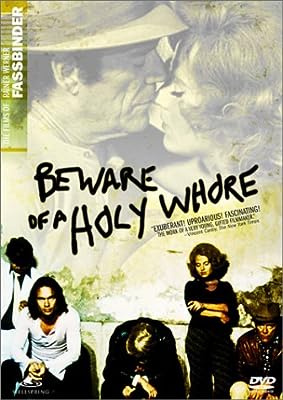 Price: $27.97
As of 2022-10-02 09:15:19 UTC (more info)
Product prices and availability are accurate as of 2022-10-02 09:15:19 UTC and are subject to change. Any price and availability information displayed on http://www.amazon.com/ at the time of purchase will apply to the purchase of this product.
Availability: Not Available - stock arriving soon
Buy Now from Amazon
Product Information (more info)
CERTAIN CONTENT THAT APPEARS ON THIS SITE COMES FROM AMAZON SERVICES LLC. THIS CONTENT IS PROVIDED 'AS IS' AND IS SUBJECT TO CHANGE OR REMOVAL AT ANY TIME.

Fans of the prodigiously gifted Rainer Werner Fassbinder will find Beware of a Holy Whore the German director's most revealing look inside his filmmaking process. A kind of neurotic backstage comedy, the movie details the struggles of a film crew in Spain: the jealousies, tantrums, money problems. He doesn't spare himself in this process, as the movie's director (played by Lou Castel) is a petulant manipulator given to screaming fits. RWF himself plays a long-suffering production manager; the great pock-marked star of French B movies, Eddie Constantine, plays himself (looking somewhat bewildered by the deadpan jokes and frequent lulls). If the slack pacing and Warholian weirdness limit the movie, it nevertheless looks very vivid, thanks to future Hollywood cinematographer Michael Ballhaus. Fassbinder made around 40 features in his brief life, and this self-portrait gives hints about the maddening, mercurial personality that could pull off such a feat. --Robert Horton