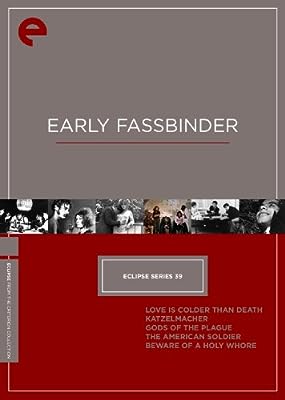 Price: $49.84
As of 2022-11-27 19:32:12 UTC (more info)
Product prices and availability are accurate as of 2022-11-27 19:32:12 UTC and are subject to change. Any price and availability information displayed on http://www.amazon.com/ at the time of purchase will apply to the purchase of this product.
Availability: Not Available - stock arriving soon
Buy Now from Amazon
Product Information (more info)
CERTAIN CONTENT THAT APPEARS ON THIS SITE COMES FROM AMAZON SERVICES LLC. THIS CONTENT IS PROVIDED 'AS IS' AND IS SUBJECT TO CHANGE OR REMOVAL AT ANY TIME.

From the very beginning of his incandescent career, the New German Cinema enfant terrible Rainer Werner Fassbinder (World on a Wire, Berlin Alexanderplatz) refused to play by the rules. His politically charged, experimental first films, made at an astonishingly rapid rate between 1969 and 1971, were influenced by the work of the antiteater, an avant-garde stage troupe that he had helped found in Munich. Collected here are five of those fascinating and confrontational works; whether a self-conscious meditation on American crime movies, a scathing indictment of xenophobia in contemporary Germany, or an off-the-wall look at the dysfunctional relationships on film sets, each is a startling glimpse into the mind of a twentysomething man who would become one of cinema’s most madly prolific artists.