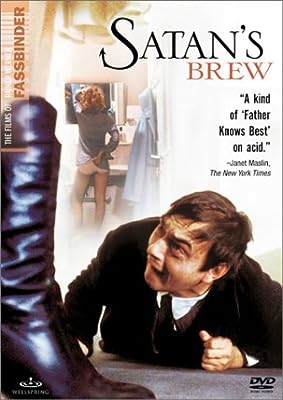 Price: $62.93
As of 2023-02-01 22:44:02 UTC (more info)
Product prices and availability are accurate as of 2023-02-01 22:44:02 UTC and are subject to change. Any price and availability information displayed on http://www.amazon.com/ at the time of purchase will apply to the purchase of this product.
Availability: Not Available - stock arriving soon
Buy Now from Amazon
Product Information (more info)
CERTAIN CONTENT THAT APPEARS ON THIS SITE COMES FROM AMAZON SERVICES LLC. THIS CONTENT IS PROVIDED 'AS IS' AND IS SUBJECT TO CHANGE OR REMOVAL AT ANY TIME.

Almost certainly the wildest movie ever made by Rainer Werner Fassbinder, Satan's Brew is as unhinged as some of the director's masterpieces are rigorously controlled. A kind of gross-out comedy on art and fame, Satan's Brew takes as its hero a celebrated poet, played by longtime RWF cohort Kurt Raab, whose resemblance to Peter Lorre is uncanny. In the first of the film's many affronts to good taste, the poet kills his wealthy mistress in an S&M game, thus prompting a financial crisis--he may even be forced to start writing again. The movie careens from one jaw-dropping oddity to the next, inspiring the suspicion that Mike Myers may have seen it before inventing his "Dieter" character. This depraved three-ring circus is not the way to be introduced to Fassbinder, but the director's fans will be amused. To quote the movie itself: "An epic from the sordid depths of humanity!" --Robert Horton