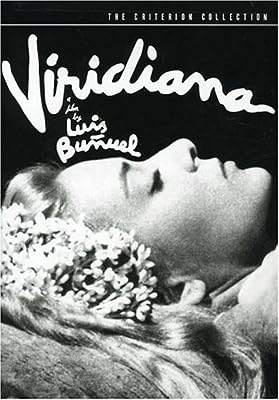 Price: $219.98
Availability: Not Available - stock arriving soon
Buy Now from Amazon
Product Information (more info)
CERTAIN CONTENT THAT APPEARS ON THIS SITE COMES FROM AMAZON SERVICES LLC. THIS CONTENT IS PROVIDED 'AS IS' AND IS SUBJECT TO CHANGE OR REMOVAL AT ANY TIME.

Luis Bunuel's greatest film Viridiana is not anti-Catholic nor against religion, but it told a scandalous story about a virtuous nun, her rich perverted uncle and a hansom young lustful son, and included a bleak and pessimistic ending that involved the nun leaving the convent, and quietly entering the bedroom of her cousin and another women; which suggested a ménage-a-trois. In one of the funniest and shocking moments of the film, homeless beggars explore the insides of a wealthy estate, admiring the portraits, the linen, the expensive silverware, and eventually decide to have a feast. In a wonderfully wicked cut, Buñuel moves to a later stage of the banquet in which the main course is over, where they're empty wine bottles scattered everywhere, and most of the beggars are already drunk. One of the small babies of the beggars cries, two women have an appalling fight and a leper puts on the phonograph of a recording of Handel’s “Halle­lujah Chorus” to which he himself dances to while wearing the corset and veil of a dead bride. And in one of the most iconic moments in the cinema, everyone drunkenly lines up along one side of the table for a photograph (in which the photographer instead lifts up her dress to flash her audience) as this sequence closely resembles Leonardo da ­Vinci’s famous painting of The Last Supper.

Banned in Spain and denounced by the Vatican, Luis Bunuel's hilarious vision of life as a beggar's banquet is regarded by many as his masterpiece. In it, the young novice Viridiana does her utmost to maintain her Catholic principles, but her lecherous uncle and a motley assemblage of paupers force her to confront the limits of her idealism. Winner of the Palme d'Or at the 1961 Cannes Film Festival, this anticlerical free-for-all is as shocking today as ever.

While its so-called "blasphemies" have been tamed by the passage of time, Luis Buñuel's Viridiana remains a masterpiece for the ages. After 22 years in Mexico and the United States, Buñuel returned to his native Spain in 1961 with dictator Franco's permission to make any film he wanted, pending the approval of censors. Inspired by a minor saint named Viridiana and an erotic fantasy about making love to the Queen of Spain after drugging her, Buñuel proceeded to combine these elements into a characteristically provocative scenario about Viridiana (Silvia Pinal), a young woman about to become a nun, who leaves her convent to visit the decaying estate of her uncle, Don Jaime (Fernando Rey), an eccentric widower who's immediately taken with Viridiana's close resemblance to his dead wife. Jaime's aborted attempt to seduce Viridiana (and his subsequent suicide) sets the film's second half in motion, as Viridiana assuages her guilt by turning Don Jaime's estate into a haven for the dispossessed--quite literally a "beggar's banquet" that culminates in one of the most indelible images in all of Buñuel: a staged recreation of da Vinci's "The Last Supper," with a cast of itinerant peasants as "disciples" in Buñuel's new world order--a cutting response to backward notions of progress.

Like any great film, Viridiana reveals its depth and detail through multiple viewings. The film is scathingly critical of Catholic hypocrisy and Franco's Spain (Don Jaime's estate is a direct reflection of the country's moribund state of sociopolitical decay), and its allegorical content was not lost on Spanish authorities, who banned the film (it wasn't shown in Spain until 1977) after it won the coveted Palme D'Or at the Cannes Film Festival. In a closing stroke of genius, Buñuel skirted around his censors with a final scene even more provocative (in its subtle implications) than the sexually suggestive ending he'd originally filmed. With much to say about the conflicting nature of human desires, Viridiana may have softened over decades, but it's never lost its ability to spark debate, discussion, and rewarding analysis of Buñuel's directorial vision. --Jeff Shannon

On the DVD
The newly restored, high-definition digital transfer of Viridiana impressively maintains Criterion's exacting standards of audio-visual quality; it's a flawless transfer, with deep blacks and richly detailed clarity. The supplements include new (2006) video interviews with actress Silvia Pinal and Spanish cultural scholar Richard Porton; warmly revealing excerpts from the 1964 French TV series "Cineastes of Our Times," featuring an interview with Buñuel; and a 30-page booklet with an essay on Viridiana by Princeton film scholar Michael Wood, and a generous interview excerpt from the book Objects of Desire: Conversations with Luis Buñuel. --Jeff Shannon

Luis Bunuel is one of the most brilliant and cynical directors of all time, a man full of sexual fetishes, surreal and mistaken identities, and absurdities of normal situations taken into a different context. He also had a streak of pessimism and nihilism, presenting the cruel, bleak and destructive views of human existence. And yet his films are never bitter, angry or lacking charm. First and foremost Bunuel was a satirist and was a master at black comedy; it was just the topics he chose to satirize didn't go over very well with the public. When originally released Viridiana caused a tremendous stir within the Catholic world, starting with the Vatican’s newspaper which was instantly up in arms with the film, describing it as "blasphemous". The Spanish government who had initially approved the film’s submission at Cannes (although virtually no one in Spain had seen it) suddenly banned the film; and it wasn't shown in Spain until 1977. Luis Buñuel shot Viridiana in the early months of 1961, in his native Spain, and it was the first film he had made since his departure for the United States and Mexico in 1939. Many of Bunuel's admirers wondered why he would return to Spain at a time when the fascist dictator Franco was still in power. He told various stories, one was that he was offered four times his salary by a producer, and another was that he felt nostalgia for his homeland. A third that he didn't mention, I suspect, was to make this particular film.