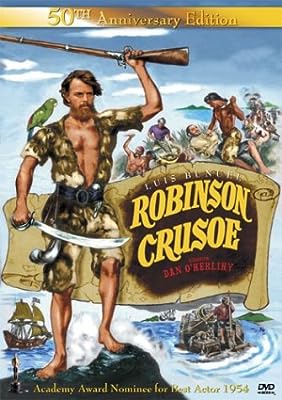 Price: $14.93
As of 2023-01-31 20:34:45 UTC (more info)
Product prices and availability are accurate as of 2023-01-31 20:34:45 UTC and are subject to change. Any price and availability information displayed on http://www.amazon.com/ at the time of purchase will apply to the purchase of this product.
Availability: Not Available - stock arriving soon
Buy Now from Amazon
Product Information (more info)
CERTAIN CONTENT THAT APPEARS ON THIS SITE COMES FROM AMAZON SERVICES LLC. THIS CONTENT IS PROVIDED 'AS IS' AND IS SUBJECT TO CHANGE OR REMOVAL AT ANY TIME.

Daniel Defoe's British sailor is shipwrecked for 28 years with cannibals, and his man Friday. Directed by Luis Bunuel.

The most surreal aspect of this adaptation of Daniel Defoe's Robinson Crusoe is how faithful Surrealist director Luis Bunuel is to the original book! Which is not to say it's sluggish or literary--Bunuel recreates the story with lush scenery and vivid images, as if he himself were discovering the tropical island along with the Englishman shipwrecked in 1659. Crusoe (Daniel O'Herlihy, later to appear in RoboCop) spends 28 years building a home and struggling to maintain his sanity; only a friendship formed with a former cannibal whom he dubs Friday (Jaime Fernandez) breaks his isolation. Bunuel (Un Chien Andalou, Belle De Jour, That Obscure Object of Desire) hews scrupulously to even the most colonial aspects of the original material. Crusoe's original expedition set out to trade slaves, and when Crusoe first meets Friday, he introduces himself as "Master" and comments, "How pleasant it was once more to have a servant." But moments of puckish humor--such as a theological debate in which Friday questions the emotional stability of God--reveal that Bunuel was hardly blind to these issues. Bunuel's sharp eye results in a straightforward but superb version of the classic adventure story. The dvd has a small handful of extras, including an extensive audio interview with O'Herlihy (who was nominated for an Academy Award for his performance), in which he reminisces about Orson Welles and reveals that though the movie is in English, Bunuel never spoke it and O'Herlihy had to learn Spanish so he could take direction. --Bret Fetzer