Unfaithfully Yours (The Criterion Collection) 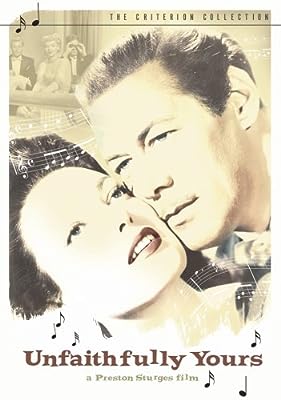 Price: $21.50
As of 2021-06-14 12:38:00 UTC (more info)
Product prices and availability are accurate as of 2021-06-14 12:38:00 UTC and are subject to change. Any price and availability information displayed on http://www.amazon.com/ at the time of purchase will apply to the purchase of this product.
Availability: Not Available - stock arriving soon
Buy Now from Amazon
Product Information (more info)
CERTAIN CONTENT THAT APPEARS ON THIS SITE COMES FROM AMAZON SERVICES LLC. THIS CONTENT IS PROVIDED 'AS IS' AND IS SUBJECT TO CHANGE OR REMOVAL AT ANY TIME.

In this pitch-black comedy from legendary writer-director Preston Sturges, Rex Harrison stars as Sir Alfred De Carter, a world-famous symphony conductor consumed with the suspicion that his wife is having an affair. During a concert, the jealous De Carter entertains elaborate visions of vengeance, set to three separate orchestral works. But when he attempts to put his murderous fantasies into action, nothing works out quite as planned. A brilliantly performed mixture of razor-sharp dialogue and uproarious slapstick, Unfaithfully Yours is a true classic from a grand master of screen comedy.

Preston Sturges has his great run in 1940-44, with a series of comedy masterpieces unparalleled in Hollywood film. 1948's Unfaithfully Yours proves that he still had the touch, if only he could have found a supportive studio for his genius. (It would've helped if Unfaithfully Yours had been a hit, which it was not.) Sir Alfred De Carter (Rex Harrison) is a witty, vain orchestra conductor, a celebrated man married to a beautiful woman (Linda Darnell). He becomes convinced of her infidelity, and while he is on the podium during a concert, he fantasizes three homicidal revenge fantasies--all set to the classics.

The conductor looks suspiciously like a self-portrait by Sturges, and the delicious dialogue comes pouring out of Rex Harrison like pearls from a goblet. The film's main disappointment is that it doesn't feature the teeming stock company of character actors that crowd Sturges's earlier pictures (although Rudy Vallee, Lionel Stander, and Edgar Kennedy come through nicely). The film, while morbid, is often laugh-out-loud funny, but it also has something sneakily brilliant to say about the gulf between art and life: how the exquisite timing and perfect mechanics of Sir Alfred's imagination come a-cropper when he actually tries to enact his fantasies. Unfaithfully Yours was remade in a not-bad version with Dudley Moore in 1984, but this one's the keeper. Too bad it couldn't save Sturges--this is the last worthy film in a too-brief career. --Robert Horton

Under the Roofs of Paris (The Criterion ...