The Wages Of Fear (The Criterion Collection) [Blu-ray] 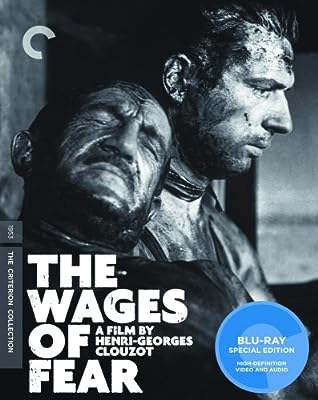 Price: $26.19
As of 2022-12-07 00:25:48 UTC (more info)
Product prices and availability are accurate as of 2022-12-07 00:25:48 UTC and are subject to change. Any price and availability information displayed on http://www.amazon.com/ at the time of purchase will apply to the purchase of this product.
Availability: Not Available - stock arriving soon
Buy Now from Amazon
Product Information (more info)
CERTAIN CONTENT THAT APPEARS ON THIS SITE COMES FROM AMAZON SERVICES LLC. THIS CONTENT IS PROVIDED 'AS IS' AND IS SUBJECT TO CHANGE OR REMOVAL AT ANY TIME.

In one of the most nerve-racking thrillers ever made, Henry-Georges Clouzot's The Wages of Fear is like a full frontal assault on a viewers senses with its heart pounding suspense and unrelenting tension. Four men drive two trucks of nitroglycerin three hundred miles across a hellish landscape full of potholes, rock-stewn passes, rickety bridges and dangerously tight turns to put out an oil fire that is raging on the other side of the mountain. Any slight shake or rattle could detonate the nitroglycerin and kill everyone near its blast. The director Henri-Georges Clouzot has been labeled as 'The French Hitchcock' and his style of films have been considered some of the most thrilling and scariest films of the French cinema. The film stands alone as the purest exercise in cinematic tension ever carved into celluloid, a work of art so viscerally nerve-racking that one fears a misplaced whisper from the audience could cause the screen to explode.

In a squalid South American oil town, four desperate men sign on for a suicide mission to drive trucks loaded with nitroglycerin over a treacherous mountain route. As they ferry their expensive cargo to a faraway oil fire, each bump and jolt tests their courage, their friendship, and their nerves. The Wages of Fear (Le salaire de la peur) is one of the greatest thrillers ever committed to celluloid, a white-knuckle ride from France s legendary master of suspense Henri Georges-Clouzot.

BLU-RAY SPECIAL EDITION FEATURES:
Restored high-definition digital transfer with uncompressed monaural soundtrack
Video interviews with assistant director Michel Romanoff and Henri-Georges Clouzot biographer Marc Godin
Interview with Yves Montand from 1988
Henri-Georges Clouzot: The Enlightened Tyrant, a 2004 documentary on the director s career
Censored, an analysis of cuts made to the film for its 1955 U.S. release
PLUS: An booklet featuring an essay by novelist Dennis Lehane

Clouzot's themes in The Wages of Fear are quite bleak on the primitive behavior of men, nature and society which is made brilliantly clear by the opening first frame. (Which is later appropriated once again in the opening of Sam Peckinpah's The Wild Bunch). With a single stroke, Clouzot has already set in motion his primary theme—that the world is a primitive, cruel and animalistic place, and that men are constantly 'goal oriented', addicted in the quest to become heroic and adrenaline junkies, to competitively win gold or fortune no matter what the sacrifice is. Not only does The Wages of Fear brilliantly depict the primitive nature of arrogant macho mentality but it is also a savage commentary on greedy corporate imperialism, the rape of the land, the ridiculous folly of man, and how Americans exploit the use of poor foreign cultures.