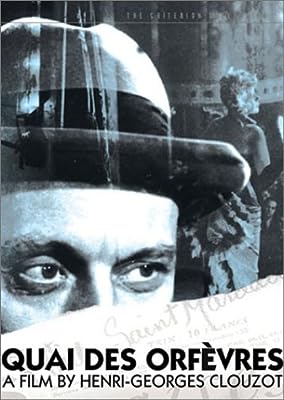 Price: $29.95
As of 2023-02-01 09:42:25 UTC (more info)
Product prices and availability are accurate as of 2023-02-01 09:42:25 UTC and are subject to change. Any price and availability information displayed on http://www.amazon.com/ at the time of purchase will apply to the purchase of this product.
Availability: Not Available - stock arriving soon
Buy Now from Amazon
Product Information (more info)
CERTAIN CONTENT THAT APPEARS ON THIS SITE COMES FROM AMAZON SERVICES LLC. THIS CONTENT IS PROVIDED 'AS IS' AND IS SUBJECT TO CHANGE OR REMOVAL AT ANY TIME.

Though dressed in the guise of a murder mystery, Quai des Orfèvres is a rich, engrossing character study in which murder plays a secondary role. Six years before the triumph of The Wages of Fear, director Henri-Georges Clouzot couldn't find a copy of his source novel (Légitime Defense, by Stanislas-André Steeman), so he crafted this stylish police procedural from spotty memory, infuriating the author while freeing himself to explore the depths of his all-too-human characters. Using atmospheric Parisian locations and shadowy compositions that rival anything in American film noir, Clouzot gives plausible alibis to the prime suspects--a dancehall chanteuse, her suspicious husband, and a fashionable lesbian photographer--while a seasoned detective (played to perfection by Louis Jouvet) efficiently sorts through the clues. Anyone expecting thrills will be disappointed: Clouzot's fascination with human behavior prevails, and this subtle mix of motives and secrets is delicately balanced with underworld cynicism and a compassionate understanding of the human heart. --Jeff Shannon

The Wages Of Fear (The Criterion Collect...