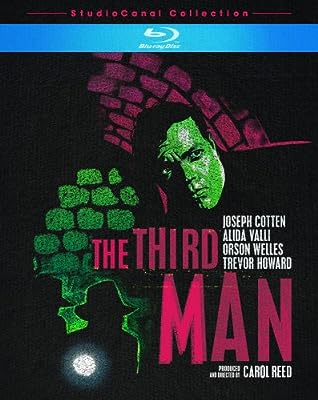 Price: $19.99
As of 2021-05-17 08:13:04 UTC (more info)
Product prices and availability are accurate as of 2021-05-17 08:13:04 UTC and are subject to change. Any price and availability information displayed on http://www.amazon.com/ at the time of purchase will apply to the purchase of this product.
Availability: Not Available - stock arriving soon
Buy Now from Amazon
Product Information (more info)
CERTAIN CONTENT THAT APPEARS ON THIS SITE COMES FROM AMAZON SERVICES LLC. THIS CONTENT IS PROVIDED 'AS IS' AND IS SUBJECT TO CHANGE OR REMOVAL AT ANY TIME.

THE THIRD MAN is a British cinematic icon: from director Carol Reed, author Graham Greene and starring Joseph Cotten, Alida Valli and Orson Welles. Set in post-war Vienna, the film noir features some of cinema's most memorable set pieces --- the chase through the sewers, the enormous ferris wheel, the elm-lined cemetery...and Anton Karas' zither score, a worldwide phenomenon in itself. THE THIRD MAN is a swirling blend of thriller, romance, mystery and war film that was nominated for three Oscars(R) and named to the AFI's Top 100 Movies List. French & Spanish Subtitles