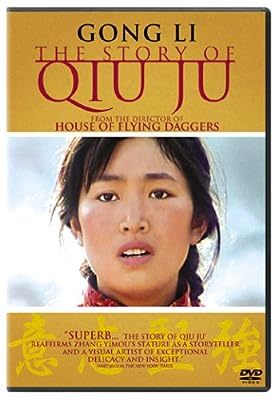 Price: $19.99
As of 2021-09-17 00:28:44 UTC (more info)
Product prices and availability are accurate as of 2021-09-17 00:28:44 UTC and are subject to change. Any price and availability information displayed on http://www.amazon.com/ at the time of purchase will apply to the purchase of this product.
Availability: Not Available - stock arriving soon
Buy Now from Amazon
Product Information (more info)
CERTAIN CONTENT THAT APPEARS ON THIS SITE COMES FROM AMAZON SERVICES LLC. THIS CONTENT IS PROVIDED 'AS IS' AND IS SUBJECT TO CHANGE OR REMOVAL AT ANY TIME.

A humorous fable of justice that traverses shot in the north of China. Gong Li plays Qiu Ju, a tenacious farmer determined to right a wrong done to her husband. Defying all stereotypes of the passiveChinese woman, she remains unbowed by the frustrations of bureaucracy in her quixotic search for dignity.

The kick is never shown, but the entire film is based around it. It's winter in the remote Shaanxi province. Pregnant Qiu Ju (Gong Li, 2046) is married to laidback farmer Qinglai (Liu Pei Qi). When village chief Wang (Lei Lao Sheng) kicks him during an argument, she sets out to ensure that her husband receives medical attention--and justice. Clad in a bulky jacket, face partially obscured by a thick scarf, the strong-willed woman, joined by sister-in-law Meizi (Yang Liu Chun), travels far and wide to find someone who can coerce Wang to apologize (she asked, he refused). All agree the chief was in the wrong, but each authority with whom she meets hands her off to another. Along the way, the couple is offered financial compensation (for medical care and lost wages), but an apology is as elusive as a dragonfly in December. Taking cues from both Frank Capra (Mr. Smith Goes to Washington) and Vittorio De Sica (Bicycle Thieves), Zhang Yimou (House of Flying Daggers) presents modern-day China as a country where bureaucrats run the show and the citizens--especially the women--must suffer the consequences. Fortunately, some are more persistent than others, and The Story of Qiu Ju is far from tragic. Just as their fifth pairing represents one of Yimou's rare contemporary efforts, the dressed-down title character is also an anomaly for Li, his real-life love at the time. The risk paid off and the result is one of their most cherished collaborations. --Kathleen C. Fennessy