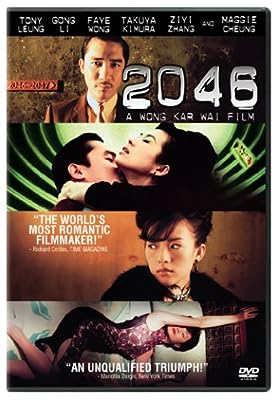 Price: $14.99
As of 2021-07-26 09:40:34 UTC (more info)
Product prices and availability are accurate as of 2021-07-26 09:40:34 UTC and are subject to change. Any price and availability information displayed on http://www.amazon.com/ at the time of purchase will apply to the purchase of this product.
Availability: Not Available - stock arriving soon
Buy Now from Amazon
Product Information (more info)
CERTAIN CONTENT THAT APPEARS ON THIS SITE COMES FROM AMAZON SERVICES LLC. THIS CONTENT IS PROVIDED 'AS IS' AND IS SUBJECT TO CHANGE OR REMOVAL AT ANY TIME.

A Hong Kong writer finds inspiration from the women he's encountered in his past in this futuristicstory of love and memory from Wong Kar Wai, who continues the story he began in his acclaimed masterpiece In the Mood for Love. Remembering back to the early 1960s, when he lived in the Oriental Hotel in Hong Kong, Chow (Hero's Tony Leung) writes an erotic story that begins with a mysterious woman who lived in room 2046. Chow moves into room 2047 and begins an affair with a beautiful prostitute who now rents the mysterious woman's room. As he writes his story, which he sets in the future year 2046, Chow tells of a place where people travel to recapture lost memories; he is the first one to return. Nominated for the Golden Palm Award at the 2004 Cannes Film Festival, 2046 also stars Ziyi Zhang (Crouching Tiger, Hidden Dragon), Gong Li (Memoirs of a Geisha) and Maggie Cheung (Hero).

In Wong Kar Wai's quasi-sequel to In the Mood for Love, 2046 is a hotel room, a futuristic story, and a state of mind. Tony Leung returns as Chow, but perhaps not the same Chow who appeared in the first film. Starting three years later in 1966, we see Chow on various Christmases as he lives, loves, and writes in a hotel and nearby restaurants. Although he is less sensitive and more of a ladies man now, Chow's love life always seems to exceed his grasp. Whether the character is the same (the director calls this an "echo" of the first movie) might be trivial. Hong Kong filmmaker Wai is such a visualist (Time magazine tabbed him as the "world's most romantic filmmaker"), the images wash over with swirling smoke, neon lights, and the faces of his outstanding cast, all lovingly photographed and smoothly scored. There's a lot more going on than the visuals, and Wai's fans will certainly find more and more details on repeated viewings. We travel into Chow's futuristic story, where the acquaintances become fictional characters traveling to a place where "everyone goes" to recapture lost memories. Often Chow talks about never seeing a lover ever again, but eventually bumps into her. The final result is a film some will cherish; others will long for the more traditional storyline of the first film. Wai certainly finds a new direction for actress Ziyi Zhang (House of Flying Daggers) as a prostitute who becomes one of Chow's many lovers. And Leung continues to be one of the world's great film actors, with a face and acting style the camera just loves. --Doug Thomas