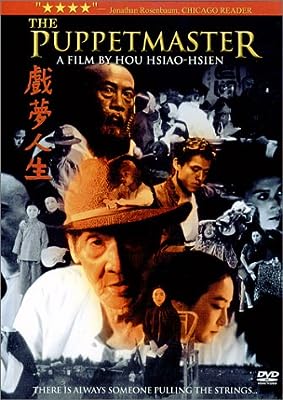 Price: $24.98
As of 2021-09-18 11:06:24 UTC (more info)
Product prices and availability are accurate as of 2021-09-18 11:06:24 UTC and are subject to change. Any price and availability information displayed on http://www.amazon.com/ at the time of purchase will apply to the purchase of this product.
Availability: Not Available - stock arriving soon
Buy Now from Amazon
Product Information (more info)
CERTAIN CONTENT THAT APPEARS ON THIS SITE COMES FROM AMAZON SERVICES LLC. THIS CONTENT IS PROVIDED 'AS IS' AND IS SUBJECT TO CHANGE OR REMOVAL AT ANY TIME.

Based on the actual memoirs of Li Tien-lu, Taiwan's most celebrated puppeteer, The Puppetmaster tells the epic tale of one man's sturgle against seemingly insurmountable adversary. Spanning the years from Li's birth in 1909 to the end of Janpan's 50-yr occupation of Taiwan in 1945, this remarkable true story captures the puppetmaster's hardships as well as the tragic sweep of this war-torn era. The portrait that emerges reflects the complex nature of Chinese culture under Japanese rule during the first half of the 20th Century.