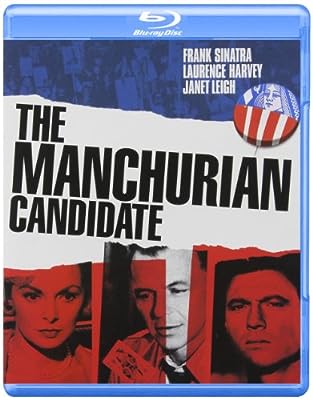 Price: $19.99
As of 2023-02-06 04:50:30 UTC (more info)
Product prices and availability are accurate as of 2023-02-06 04:50:30 UTC and are subject to change. Any price and availability information displayed on http://www.amazon.com/ at the time of purchase will apply to the purchase of this product.
Availability: Not Available - stock arriving soon
Buy Now from Amazon
Product Information (more info)
CERTAIN CONTENT THAT APPEARS ON THIS SITE COMES FROM AMAZON SERVICES LLC. THIS CONTENT IS PROVIDED 'AS IS' AND IS SUBJECT TO CHANGE OR REMOVAL AT ANY TIME.

You will never find a more chillingly suspenseful, perversely funny, or viciously satirical political thriller than The Manchurian Candidate, based on the novel by Richard Condon (author of Winter Kills). The film, withheld from distribution by star Frank Sinatra for almost a quarter century after President Kennedy's assassination, has lost none of its potency over time. Former infantryman Bennet Marco (Sinatra) is haunted by nightmares about his platoon having been captured and brainwashed in Korea. The indecipherable dreams seem to center on Sergeant Raymond Shaw (Laurence Harvey), a decorated war hero but a cold fish of a man whose own mother (Angela Lansbury, in one of the all-time great dragon-lady roles) describes him as looking like his head is "always about to come to a point." Mrs. Bates has nothing on Lansbury's character, the manipulative queen behind her second husband, Senator John Iselin (James Gregory), a notoriously McCarthyesque demagogue. --Jim Emerson

Kiss Me Deadly (The Criterion Collection...