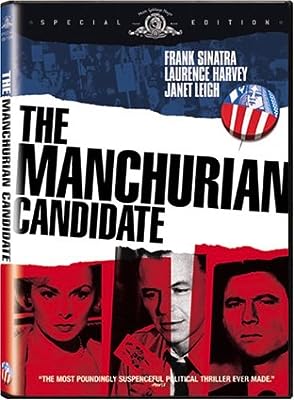 Price: $10.99
As of 2021-05-18 06:32:04 UTC (more info)
Product prices and availability are accurate as of 2021-05-18 06:32:04 UTC and are subject to change. Any price and availability information displayed on http://www.amazon.com/ at the time of purchase will apply to the purchase of this product.
Availability: Not Available - stock arriving soon
Buy Now from Amazon
Product Information (more info)
CERTAIN CONTENT THAT APPEARS ON THIS SITE COMES FROM AMAZON SERVICES LLC. THIS CONTENT IS PROVIDED 'AS IS' AND IS SUBJECT TO CHANGE OR REMOVAL AT ANY TIME.

Eerie, shocking, daring, thrilling and mesmerizing, The Manchurian Candidate will leave youbreathless (People)! Featuring an all-star cast, including Angela Lansbury in an OscarÂ(r)-nominated performance, this chilling and controversial (Leonard Maltin) film may be the most sophisticated political satire ever made (Pauline Kael). When a platoon of Korean War G.I.s iscaptured, they somehow end up at a ladies garden club party. Or do they? Major Bennett Marco (Frank Sinatra) can't remember. As he searches for the answer, he discovers threads of a diabolical plot orchestrated by the utterly ruthless Mrs. Iselin (Lansbury) and involving her war hero son (LaurenceHarvey), her senator husband (James Gregory) and a secret cabal of enemy leaders.