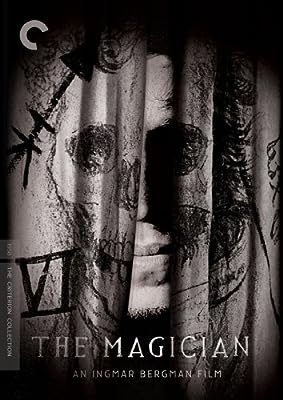 THE MAGICIAN (Ansiktet), directed by Ingmar Bergman (The Seventh Seal, Fanny and Alexander), is an engaging, brilliantly conceived tale of deceit from one of cinema’s premier illusionists. Max von Sydow (The Virgin Spring, The Exorcist) stars as Dr. Vogler, a mid-nineteenth-century traveling mesmerist and peddler of potions whose magic is put to the test by a small town’s cruel, eminently rational minister of health, Dr. Vergerus (Wild Strawberries’ Gunnar Bjornstrand). The result is a diabolically clever battle of wits that’s both frightening and funny, shot in rich, gorgeously gothic black and white.

Ingmar Bergman spent a glorious film career exploring themes of death and redemption (The Seventh Seal, Wild Strawberries), and his lesser-known gem The Magician fits perfectly into this genre. The Magician, shot eerily in crisp black and white, is one of Bergman's most unsettling films, and one that stays with the viewer long afterward. Several of Bergman's regular actors are featured, and all, as usual, are splendid: Max von Sydow, Bibi Andersson, Gunnar Björnstrand, Bengt Ekerot (who would go on to play Death memorably in The Seventh Seal), and Ulla Sjöblom. The plot is involving and a bit creepy on its own. The Magician follows von Sydow as Dr. Vogler, who leads a traveling group called Vogler's Magnetic Health Theater, which goes from town to town selling magic potions and performing feats that defy logic. Yet the members of the troupe are as reviled and persecuted by local authorities as they are embraced and fixated upon by their audiences. Bergman's direction keeps the tension between belief and fantasy, death and eroticism, as taut as a murder mystery--and perhaps with good reason. The viewer is kept guessing about the reality of the feats of the troupe and the motives of Dr. Vogler; the actors speak in unsettling and oblique riddles. Ekerot's character, Johan, muses to no one in particular, "I've prayed one prayer in my life: 'Use me, O God!' But He never understood what a devoted slave I'd have been. So I was never used… But that too is a lie. Step by step you go into the dark. The movement itself is the only truth."

While The Magician is gripping on its own merits, the Criterion Collection includes several extras that shed additional light on the film. Peter Cowie, a Bergman expert, narrates an excellent mini-documentary about The Magician, saying he believes Bergman made the film in response to his many critics, especially from his days as a theater director in the '50s in Sweden. Cowie's feature is an essential accompaniment to viewing The Magician in its context. Other rich extras include a mini-biography of Bergman, an interview with Bergman from 1967, and a booklet with an essay by film scholar Geoff Andrew. The Magician is an absolutely essential film for any Bergman fan. --A.T. Hurley