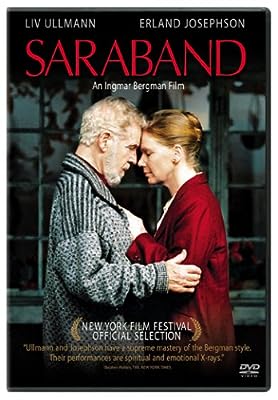 Price: $8.43
As of 2021-07-25 18:55:04 UTC (more info)
Product prices and availability are accurate as of 2021-07-25 18:55:04 UTC and are subject to change. Any price and availability information displayed on http://www.amazon.com/ at the time of purchase will apply to the purchase of this product.
Availability: Not Available - stock arriving soon
Buy Now from Amazon
Product Information (more info)
CERTAIN CONTENT THAT APPEARS ON THIS SITE COMES FROM AMAZON SERVICES LLC. THIS CONTENT IS PROVIDED 'AS IS' AND IS SUBJECT TO CHANGE OR REMOVAL AT ANY TIME.

SARABAND - the acclaimed follow-up to the Golden Globe-winning Best Foreign Film, Scenes From a Marriage - is director Ingmar Bergman's last statement on film, "a powerful and poignant final roar from the grand old man of cinema" (Richard Corliss, Time). Thirty years after their divorce, Marianne (Liv Ullman, in a reprise of her National Society of Film Critics Award-winning role) impulsively decides to visit Johan (Erland Josephson) at his isolated country retreat. Upon her arrival, she bears witness to the tortured relationship between her bitter ex-husband, his hated son Henrik (Borje Ahlstedt), and 19-year-old granddaughter, Karin (Julia Dufvenius). Unable to cope with his wife's recent death, Henrik expresses his grief through an unhealthy obsession with his teenage daughter. Ignoring his son's protests, Johan offers to send the girl to a prestigious music conservatory, forcingKarin to choose between a promising future as a cellist or caring for her tormented father.

You know you're back in Bergman country when a character begins speaking to the camera right from the start. In the prologue to Saraband, which was made for Swedish television, Marianne (Liv Ullmann) recounts the changes that have taken place since Scenes From a Marriage, the miniseries-turned-feature that introduced the central couple. Johan (Erland Josephson) has retired from academia, while she continues to practice family law. Since splitting up for good, they haven't seen each other in over 30 years. Marianne decides it's time to reconnect and makes plans to visit Johan at his remote cottage. While they catch up, she gets to know his estranged son, Henrik (Börje Ahlstedt), and beloved granddaughter, Karin (Julia Dufvenius), who are staying in the guest house. Both are still reeling from the death of Henrik's wife, Anna, two years ago. Although she never appears--she's represented by a portrait of Bergman's late wife, Ingrid, to whom the film is dedicated--Anna's ghost haunts them all (even Marianne, who never knew her). Divided into 10 parts plus the prologue and epilogue, Saraband looks more like a play than a film, which is not necessarily a drawback (it's in keeping with the "scenes" of the original series). The focus is on the characters and their words. They could be anywhere at any time; their problems are personal yet universal. For two hours, the outside world does not exist. In the complete universe Bergman has created for them, it doesn't need to. As much a love letter to his wife as to his muse, Ullmann--who has rarely been better--Bergman has stated that Saraband will be his final work. --Kathleen C. Fennessy