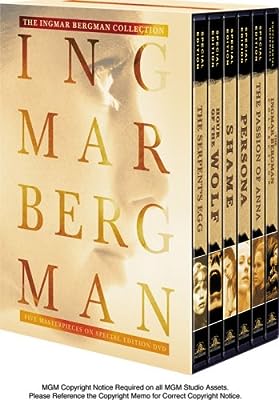 Price: $119.98
As of 2021-08-04 17:17:14 UTC (more info)
Product prices and availability are accurate as of 2021-08-04 17:17:14 UTC and are subject to change. Any price and availability information displayed on http://www.amazon.com/ at the time of purchase will apply to the purchase of this product.
Availability: Not Available - stock arriving soon
Buy Now from Amazon
Product Information (more info)
CERTAIN CONTENT THAT APPEARS ON THIS SITE COMES FROM AMAZON SERVICES LLC. THIS CONTENT IS PROVIDED 'AS IS' AND IS SUBJECT TO CHANGE OR REMOVAL AT ANY TIME.

There is no denying this fact: Ingmar Bergman's films are true commitments. Though averaging only an hour and a half in length, the psychological depth, the magnitude of human exploration, and the emotional rollercoaster you embark on while watching his films can stick with you for a lifetime. According to Bergman, "No form of art goes beyond ordinary consciousness as film does, straight to our feelings, deep down into the dark rooms of our souls." By the mid-sixties, Bergman was about to show the world how far the medium film could go. He began to move away from his Seventh Seal style into the dreamlike, deconstructive, nonlinear realm that would continue throughout his career. This DVD set wonderfully captures all his landmark films of the late 1960s marking this significant transition. Each film stars Liv Ullmann, Bergman's beautiful muse, and involves another longtime collaborator, cinematographer Sven Nykvist. Each film has been remastered, and is presented in its unedited theatrical version loaded with pertinent extras, including a featurette on each film, interviews with cast members (every disc has an on-camera interview with Liv Ullmann), a feature-length commentary by Bergman biographer Marc Gervais on four of the films, and a wonderfully surprising commentary by David Carradine on The Serpent's Egg. Couple these films with an extra disc of supplemental material and you have yourself an incredible Ingmar Bergman film festival. --Rob Bracco

The Films:
In Persona (1966), Elisabeth Vogler (Live Ullmann) has stopped speaking and withdrawn from the world. At her doctor's orders, she moves to a remote cottage to be watched over by Nurse Alma (Bibi Andersson). To fill the silence, Nurse Alma talks aloud to her silent listener and slowly lays out her soul and identity to her patient. In essence, the nurse becomes the patient herself. If the extent of your Bergman exposure is The Seventh Seal, be prepared to get blown away by this film's hallucinatory, multilayered exploration in identity and personality. The hallucinatory analysis of personal identify continues with the haunting The Hour of the Wolf (Vargtimmen) (1968). Artist Johan Berg (Max von Sydow) is desperately trying hold on to his sanity, while being haunted by his demons. His wife (Ullmann) is trying to help, but also begins to share Johan's hallucinations. As they both begin a downward spiral Ullmann has to make a painful decision between the love of her husband or her own sanity. Shame (Skammen) (1968) stars von Sydow and Ullmann as a couple in the midst of a civil war. They escape to their farm for safety only to be haunted by the soldiers that invade their home. The Passion of Anna (En Passion) (1969) again stars von Sydow and Ullmann. Andreas and Anna live on a remote island with a neighboring couple. While trying to escape the skeletons of their pasts, they each seek solace in one another, even as their lives are torn apart by deception, isolation and psychological turmoil. The last film in the set is a leap forward to 1977. The Serpent's Egg (Das Schlangenei) may be the weakest of the set, but by no means is it a lesser film. It tells the tale of two Jewish trapeze artists trapped in Berlin during the Nazis regime. Bergman would only turn out three more feature films before disappearing into retirement. --Rob Bracco