The Human Condition (The Criterion Collection) 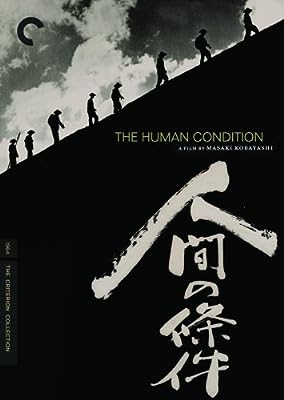 Price: $79.95
As of 2021-02-26 01:37:01 UTC (more info)
Product prices and availability are accurate as of 2021-02-26 01:37:01 UTC and are subject to change. Any price and availability information displayed on http://www.amazon.com/ at the time of purchase will apply to the purchase of this product.
Availability: Not Available - stock arriving soon
Buy Now from Amazon
Product Information (more info)
CERTAIN CONTENT THAT APPEARS ON THIS SITE COMES FROM AMAZON SERVICES LLC. THIS CONTENT IS PROVIDED 'AS IS' AND IS SUBJECT TO CHANGE OR REMOVAL AT ANY TIME.

First of a trilogy of films. During the Second World War, a Japanese conscientious objector named Kaji works as a supervisor in a Manchurian prison camp. He hopes to avoid duty as a soldier, but he also hopes to be helpful to the welfare of his prisoners. An escape attempt by Chinese prisoners results in Kaji's arrest for collusion. He faces the possibility of transferral to combat--or worse.