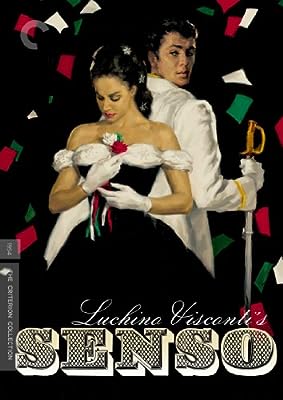 Price: $29.95
As of 2023-02-06 06:04:05 UTC (more info)
Product prices and availability are accurate as of 2023-02-06 06:04:05 UTC and are subject to change. Any price and availability information displayed on http://www.amazon.com/ at the time of purchase will apply to the purchase of this product.
Availability: Not Available - stock arriving soon
Buy Now from Amazon
Product Information (more info)
CERTAIN CONTENT THAT APPEARS ON THIS SITE COMES FROM AMAZON SERVICES LLC. THIS CONTENT IS PROVIDED 'AS IS' AND IS SUBJECT TO CHANGE OR REMOVAL AT ANY TIME.

With its grand themes of illicit love, betrayal, revenge, and revolution, all in the context of actual historical events, Senso, Italian director Luchino Visconti's newly restored 1954 opus, can best be described as "operatic." No surprise there, as Visconti was as accomplished in that medium as in film; indeed, this tale opens in Venice's La Fenice opera house. The year is 1866, during a time known as the Risorgimento, when the Italians were struggling to unify their country while simultaneously chafing under the occupation of Austrian military forces. The aristocratic Countess Livia Serpieri (Alida Valli) is attending a performance of Verdi's Il Trovatore with her cold, imperious husband when circumstances lead to an encounter with Franz Mahler (Farley Granger), a dashing young Austrian lieutenant--their initial meeting is a wonderful scene in which the two trade flirtatious witticisms in her box while a soprano belts out an aria in the background. Mahler may be an obvious cad, but it isn't long before the far less experienced Livia utterly surrenders to his insouciant charms. We can guess from her after-the-fact narration, delivered in the voice of a weary, broken woman (never was the term drama queen more apt), that the affair will not turn out happily, but that doesn't detract from the fascination of watching this proud, beautiful woman surrender everything she has, not least her dignity, in the name of love while her countrymen fight to rid themselves of their Austrian oppressors. Add to that the film's sumptuous look, with its rich colors (all the more since its restoration in 2009) and opulent settings (both in Venice and the surrounding countryside, where the count and his household find refuge when the fighting starts), and you have a gloriously over-the-top, thoroughly watchable period piece with all the tragedy, passion, and melodrama of any actual opera.

Speaking of sumptuous, this Criterion Collection offering's various bonus features are twice as lengthy as the film itself. Among them are the English-language version of the film; called The Wanton Countess, it's about 30 minutes shorter, with Granger and Valli both delivering their lines in English (Visconti had originally wanted to cast Marlon Brando and Ingrid Bergman). There's also a making-of featurette, an exploration of Visconti's work in the opera world, a "visual essay" by film scholar Peter Cowie, and more--a total of some hours' worth of material. --Sam Graham