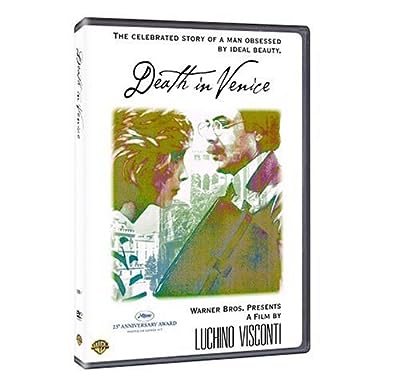 Price: $19.98
As of 2022-11-27 11:18:38 UTC (more info)
Product prices and availability are accurate as of 2022-11-27 11:18:38 UTC and are subject to change. Any price and availability information displayed on http://www.amazon.com/ at the time of purchase will apply to the purchase of this product.
Availability: Not Available - stock arriving soon
Buy Now from Amazon
Product Information (more info)
CERTAIN CONTENT THAT APPEARS ON THIS SITE COMES FROM AMAZON SERVICES LLC. THIS CONTENT IS PROVIDED 'AS IS' AND IS SUBJECT TO CHANGE OR REMOVAL AT ANY TIME.

Abroad on a rest holiday, composer Gustav Aschenbach (Dick Bogarde) is to all the world reserved and civilized. But when he glimpses someone who inspires him to give way to a secret passion, it foreshadows his doom. Director Luchino Visconti (Rocco and His Brothers, The Damned) transforms Thomas Mann's classic novel into "a masterwork of power and beauty" (William Wolf, Cue). Like Aschenbach, Visconti is an artist obsessed: his movies are awash in mood, period detail and seething emotions beneath placid surfaces. Earning its maker a Cannes Film Festival Special 25th Anniversary Prize, Death in Venice - with a soundtrack feast of Gustav Mahler music and a haunting Bogarde performance-is Visconti at his best.

Luchino Visconti's adaptation of the Thomas Mann novel is the very definition of sumptuous: the costumes and sets, the special geography of Venice, and the breathtaking cinematography combine to form a heady experience. At the center of this gorgeousness is Aschenbach (Dirk Bogarde in a meticulous performance), a controlled intellectual who unexpectedly finds himself obsessed by the vision of a 14-year-old boy while on a convalescent vacation in 1911. Visconti has turned Aschenbach into a composer, which accounts for the lush excerpts from Mahler on the soundtrack (Bogarde is meant to look like Mahler, too). Even if it tends to hit the nail on the head a little too forcefully, and even if Visconti can test one's patience with lingering looks at crowds at the beach and hotel dining rooms, Death in Venice creates a lushness rare in movies. For some viewers, that will be enough. --Robert Horton