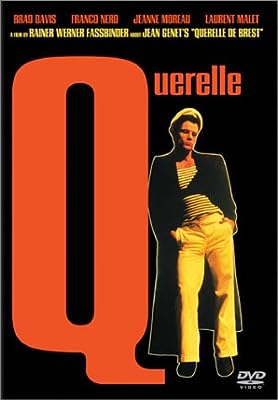 Price: $19.94
Availability: Not Available - stock arriving soon
Buy Now from Amazon
Product Information (more info)
CERTAIN CONTENT THAT APPEARS ON THIS SITE COMES FROM AMAZON SERVICES LLC. THIS CONTENT IS PROVIDED 'AS IS' AND IS SUBJECT TO CHANGE OR REMOVAL AT ANY TIME.

QUERELLE is the late Rainer Werner Fassbinder's final film. Here is the story of a beautiful, proudand tough loner, a sailor named Querelle (Brad Davis), whose commanding officer, Seblon (Franco Nero), worships and desires him from afar. Querelle turns on his drug-smuggling partner and murders him. He then goes to a notorious brothel run by the rapacious Lysiane (Jeanne Moreau), who leads Querelle into his first homosexual encounter. Subsequently, he falls in love with a fellow murderer, Gil (Hanno Poschl). Partly because his love for Gil panics him, and partly so that he can keep Gil all tohimself, Querelle betrays him to the police. But, by now, Querelle has become vulnerable and soft and, soon, the once-powerful object of passion comes to belong to Seblon.