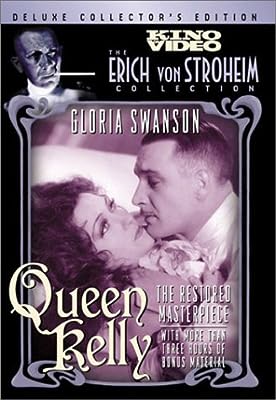 Price: $29.98
As of 2022-10-01 23:31:02 UTC (more info)
Product prices and availability are accurate as of 2022-10-01 23:31:02 UTC and are subject to change. Any price and availability information displayed on http://www.amazon.com/ at the time of purchase will apply to the purchase of this product.
Availability: Not Available - stock arriving soon
Buy Now from Amazon
Product Information (more info)
CERTAIN CONTENT THAT APPEARS ON THIS SITE COMES FROM AMAZON SERVICES LLC. THIS CONTENT IS PROVIDED 'AS IS' AND IS SUBJECT TO CHANGE OR REMOVAL AT ANY TIME.

In 1928, after years of struggles within the studio system, Erich von Stroheim found the opportunity to create his crowning achievement: a storybook romance of intoxicating beauty, counterbalanced with a frightfully grim tale of moral corruption. Gloria Swanson stars as an innocent convent girl who falls under the spell of a handsome prince (Walter Byron) on the eve of his marriage to a diabolical queen (Seena Owen). Queen Kelly might have been one of von Stroheim's greatest films had actress/producer Swanson not halted it in mid-production. Kino on video presents the critically acclaimed restoration of von Stroheim's ambitious epic, which incorporates many of the scenes (set within an African brothel) that caused Swanson to shut down the film. Also featured on this disc are rare outtakes, Swanson's alternate ending and a little seen TV performance by von Stroheim.