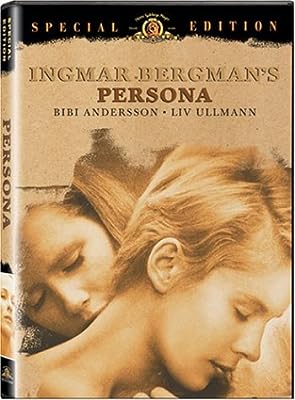 Price: $19.98
As of 2021-10-22 20:33:08 UTC (more info)
Product prices and availability are accurate as of 2021-10-22 20:33:08 UTC and are subject to change. Any price and availability information displayed on http://www.amazon.com/ at the time of purchase will apply to the purchase of this product.
Availability: Not Available - stock arriving soon
Buy Now from Amazon
Product Information (more info)
CERTAIN CONTENT THAT APPEARS ON THIS SITE COMES FROM AMAZON SERVICES LLC. THIS CONTENT IS PROVIDED 'AS IS' AND IS SUBJECT TO CHANGE OR REMOVAL AT ANY TIME.

With some of the most iconic imagery ever committed to film, this exceptionally beautiful specimenof movie-making (The New Yorker) is recognized as a modern masterpiece and a landmark in late twentieth-century art (Time Out London). Actress Elisabet Vogler (Liv Ullmann) has stopped speaking and withdrawn completely. Under doctor's orders, she's taken to a remote seaside cottage by a nurse, Alma (Bibi Andersson). Alma chats to fill the silence and gradually begins to lay bareher entire identity until she discovers it is being coolly sucked away from her. As the women battle for control and sanity, the question becomes not which of them is patient and which is caregiver, but are they two separate women at all?

Ingmar Bergman's 1966 film, photographed by Sven Nykvist, begins when famous actress Elisabeth Vogler (Liv Ullmann) freezes on stage in the middle of a performance. Struck dumb by an unknown cause, she winds up in the care of young inexperienced nurse Alma (Bibi Andersson), and together they retreat to the seaside for the summer, where they enter into an uncommon intimacy and clash of wills. Bergman's study of the fragility of the human being and the treachery of life is incredibly moving in its perception and unrivaled imagery. And as always with Bergman and his reappearing ensemble of actors, the performances are flawless. Especially notable is the scene in which Alma recounts for the silent Elisabeth a morally and emotionally ambivalent erotic encounter she had experienced on a beach with a friend and two teenage boys. It is one of the most strangely erotic scenes ever filmed, and not a stitch of clothing is removed. Also of interest, and one of the most intriguing scenes in the film, perhaps among the most intriguing in all of cinema, is when Elisabeth paces barefooted back and forth over a patio on which we know there to be broken glass. It is an achievement in simple suspense from which many an aspiring director of thrillers could learn a bit. For those who've had their fill of predictable plots, irrelevant matter, and apish acting and are looking for something a little more sensual, poetic, and relevant to what life is about beyond the daily grind, this may be a good place to start. --James McGrath