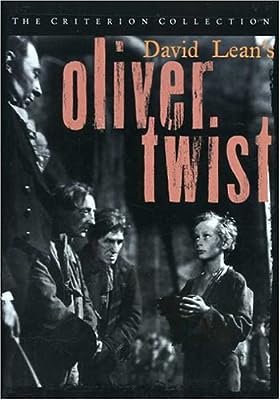 Price: $29.69
As of 2021-09-17 17:18:03 UTC (more info)
Product prices and availability are accurate as of 2021-09-17 17:18:03 UTC and are subject to change. Any price and availability information displayed on http://www.amazon.com/ at the time of purchase will apply to the purchase of this product.
Availability: Not Available - stock arriving soon
Buy Now from Amazon
Product Information (more info)
CERTAIN CONTENT THAT APPEARS ON THIS SITE COMES FROM AMAZON SERVICES LLC. THIS CONTENT IS PROVIDED 'AS IS' AND IS SUBJECT TO CHANGE OR REMOVAL AT ANY TIME.

David Lean's 1948 version of Charles Dickens' classic novel begins with a bang: the young hero's pregnant mother fighting her way through a storm, a perfect metaphor for Oliver's difficult road ahead. Set in a world of slums in the shadow of Victorian England, the story traces the boy's life in a workhouse and then with a gang of little pickpockets. A stark but good-looking film shot around some impressive sets, Lean's immortal adaptation is perhaps best known for Alec Guinness's remarkable (and slightly controversial) performance as Fagin, the old mentor to the gang of boy thieves. --Tom Keogh