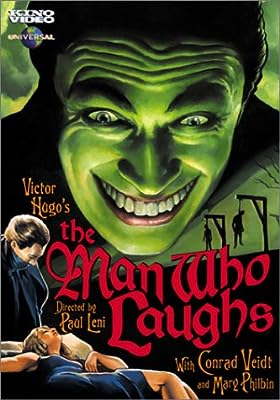 Price: $29.98
As of 2021-09-19 04:09:33 UTC (more info)
Product prices and availability are accurate as of 2021-09-19 04:09:33 UTC and are subject to change. Any price and availability information displayed on http://www.amazon.com/ at the time of purchase will apply to the purchase of this product.
Availability: Not Available - stock arriving soon
Buy Now from Amazon
Product Information (more info)
CERTAIN CONTENT THAT APPEARS ON THIS SITE COMES FROM AMAZON SERVICES LLC. THIS CONTENT IS PROVIDED 'AS IS' AND IS SUBJECT TO CHANGE OR REMOVAL AT ANY TIME.

In an effort to top the critical and financial success of The Hunchback of Notre Dame and The Phantom of the Opera, studio head Carl Laemmle recruited two influential artists of the German Expressionist school: actor Conrad Veidt (The Cabinet of Dr. Caligari) and director Paul Leni (Waxworks). The shadowy exteriors, the carnival setting, the demonically misshapen "hero" made The Man Who Laughs something entirely new to American cinema-the foundation upon which the classic Universal horror films would be built. Veidt stars as Gwynplaine, a nobleman's son who is kidnapped by a political enemy, and then is mutilated by a gypsy "surgeon" who carves a monstrous smile upon his face. Finding shelter in a traveling freakshow, he falls in love with a blind girl (The Phantom Of the Opera's Mary Philbin), the one person who cannot be repulsed by his appearance. As years pass, the hand of fate draws Gwynplaine back into the world of political intrigue. He becomes the plaything of a jaded duchess (Freaks' Olga Baclanova), and his enemies renew their efforts to control him.