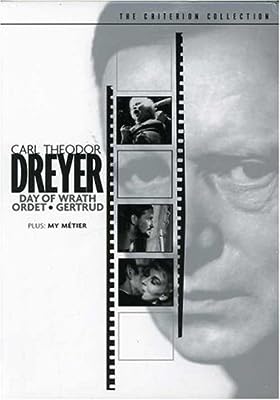 Price:
As of 2022-05-18 12:44:47 UTC (more info)
Product prices and availability are accurate as of 2022-05-18 12:44:47 UTC and are subject to change. Any price and availability information displayed on http://www.amazon.com/ at the time of purchase will apply to the purchase of this product.
Availability: Not Available - stock arriving soon
Buy Now from Amazon
Product Information (more info)
CERTAIN CONTENT THAT APPEARS ON THIS SITE COMES FROM AMAZON SERVICES LLC. THIS CONTENT IS PROVIDED 'AS IS' AND IS SUBJECT TO CHANGE OR REMOVAL AT ANY TIME.

Following the release of Carl Th. Dreyer's The Passion of Joan of Arc, The Criterion Collection renews its commitment to this major director with a Special Edition box set of his sound films, Day of Wrath, Ordet, and Gertrud. Each is an intense exploration of the clash between individual desire and social expectations, with Dreyer's famously perfectionist attention to detail shining throughout. With brand new digital transfers supervised by Gertrud director of photography Henning Bendtsen, the Criterion Collection is proud to present these Dreyer masterpieces on DVD for the first time. The fourth disc in the set presents the masterful 1995 documentary on Dreyer by Danish filmmaker Torben Skødt Jensen, Carl Th. Dreyer-My Métier. Extensive interviews with collaborators and actors provide fresh insight into the life and work of one of cinema's great masters.

When asked to describe his work, Danish director Carl Theodor Dreyer said that film should present "truth filtered through an artist's mind, truth liberated from unnecessary detail." This collection of Dreyer's three major sound features demonstrates the director's rigorous commitment to that idea.

Day of Wrath (1943)--filmed during the Nazi occupation of Denmark--is set in a 17th-century village where the fear of witchcraft and the repression of human passions lead to tragedy. Ordet (1955) is considered by many to be Dreyer's masterpiece. This complex family drama is both moving and challenging, and the ending is one of cinema's greatest moments. Gertrud (1964) tells the story of a woman's search for fulfillment. Nina Pens Rode gives an extraordinary performance, heightened by Dreyer's peerless pacing and composition.

Accompanying the three films is a documentary by avant-garde filmmaker Torben Skjodt Jensen. Dreyer claimed to be surprised that anyone would want to make a film about him, but a greater understanding of the personality and the craft that went into the making of these films only enhances their impact. In spite of a career characterized by as many setbacks as successes, Dreyer's uncompromising commitment to his art (he once suspended filming because the clouds were moving in the wrong direction) resulted in work that continues to enthrall audiences and inspire filmmakers to this day.

Interviews with Dreyer's collaborators provide the backbone of My Metier, but it is Jensen's visual approach--building layered images from photographs, manuscripts, and film clips--that explores and responds to Dreyer's movies in subtle but powerful ways. Instead of a succession of talking heads and illustrative excerpts, Jensen offers an impressionistic portrait of Dreyer in a documentary that is often as beautiful as its subject's own work. --Simon Leake